She was born on June 20, 1928 in Ashboro, Ind., to Basil James Nicoson and Esther Lee Bullerdick Nicoson. 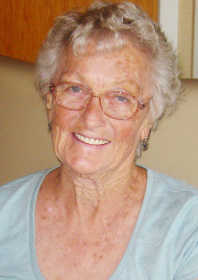 She was a graduate of Ashboro High School.

Opal attended Emmanuel Christian Church in Limedale and had been employed at Clabber Girl in Terre Haute; G.C. Murphy, J.C. Penney, IBM and the DePauw University Union Building, all in Greencastle.

She had been very active in the ladies' Golden Circle Club for several years.

She was also preceded in death by her parents and two sisters, Edna May Nicoson and Doris Evelyn Petrowski.

Interment will follow at Boone Hutcheson Cemetery. The family will receive friends from 2-6 p.m. on Sunday, Feb. 23 and on Monday one hour prior to services at the funeral home.

Memorials in Opal's name may be directed to the charity of one's choice.