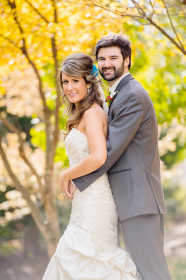 Given in marriage by her father, the bride was attended by her sister Jen (Culy) Lee as matron of honor, Lindsay Brock, Madie Podgorski, Kylie Moore and Olivia Pursell (sister of the groom).

A dinner dance reception followed at The Bridgewater Golf Club in Westfield.

The bride and groom are 2008 Westfield High School graduates. Sarah earned a graphic design degree at Ball State University with a minor in professional writing. She is currently a designer for Paramount Apparel in Bourbon, Mo. Kramer is a Trine University graduate in mechanical engineering, and is currently a graduate student in metallurgical engineering at Missouri S&T.

Kramer's parents Mike and Kristine Pursell are former Greencastle residents. He is the grandson of Jeanie Pursell Cooper and the late Bill Pursell, as well as the step-grandson of Lyle Cooper.

The newlyweds live in Rolla, Mo. and are planning a summer honeymoon in Jamaica.