Cletis Edwin Ellett, veteran minister, has gone to be with His Lord whom he served so faithfully here on earth on Tuesday, April 15, 2014 at the age of 90 at Garden Villa Health Care Center.

Cletis was born to Archie Hollis and Ethel Elizabeth (Williams) Ellett on March 12, 1924. 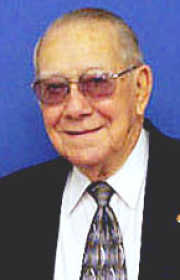 He graduated from Ellettsville High School in 1943 and married his classmate, Elizabeth Jane Holler, in 1944.

Cletis was baptized as a teenager in Bean Blossom Creek. He later studied under the tutelage of Bro. E.R. Pendygraft and learned the rudiments of pulpit speaking. Without any further training, he spent the rest of his life spreading the gospel in several states - eventually becoming the first-ever full-time minister at the Unionville Church of Christ.

Before, during and after his ministry he also worked at Indiana University in the Psychology, Opera Scenery and Athletics (Assembly Hall) departments. He also served for many years on the Board of Directors and Advisory Board for the Berean Children's Home now located in Brookhaven, Miss.

Cletis was a long-time member and former elder of the Unionville Church of Christ.

He was preceded in death by his parents; his brother, Quentin and sister-in-law Odette Ellett; his sister, Martha (Ellett) Morrow; his nephew, Ed Ellett, and his only son, Timothy Sherman Ellett, in February 2014.

Visitation will be at Chandler Funeral Home in Ellettsville from 4-8 p.m. Monday, April 21. Funeral services will be conducted at the funeral home at 1 p.m. Tuesday, April 22 with burial to follow at Presbyterian Cemetery in Ellettsville.