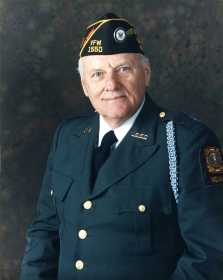 He spent four years as a machinist airman second class in the Navy and was honorably discharged in 1945.

Afterward, he attended Utah State University for four years where he received his bachelor of science degree in agronomy.

His first position with the USDA was in Miles City, Mont., where he met his wife, Donna. He spent more than 30 years as a federal government employee.

In 1979 he became a resident of the Greencastle community. Upon retiring in 1987, Don became an active member in local VFW Post 1550 where he served as commander from 1996-98 and as a member of the Honor Guard where he gave back to servicemen by honoring their deaths.

He was an outdoorsman who spent much of his free time fishing in Indiana, Canada and West Virginia. He was an avid gardener who was well known for his tomatoes.

Don was preceded in death by his parents, sister Virginia and nephew Bruce.

A celebration of Don's life will be held on Saturday, April 26 from 1-4 p.m. at Greencastle VFW Post 1550, 819 S. Jackson St., Greencastle. Family and friends are welcome.