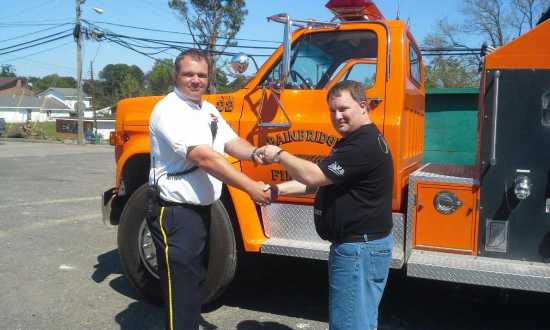 Choosing to pay-it-forward, the Bainbridge Volunteer Fire Department recently donated a truck to the Kimberly (Ala.) Fire Department. Accepting the truck from Bainbridge Chief Mark Hoke was Kimberly Chief Brian Gober on Saturday.

BAINBRIDGE -- The recent stretch of tornadoes devastated thousands across the country as it tore through towns, leaving nothing but destruction in its wake. With that destruction many, including the Bainbridge Volunteer Fire Department, are taking the initiative to help those in need by paying it forward.

Being recipients of the pay-it-forward mantra themselves, after a 2005 storm ripped off the station's roof, the Bainbridge Volunteer Fire Department, jumped at the chance to return the favor to another fire department in need.

After doing some research on those affected by the tornados, Chief Mark Hoke stumbled upon the Kimberly, Ala. Fire Department, whose station along with a church and a middle school were destroyed during an April 28 tornado.

"We know kind of what they're going through," Chief Mark Hoke said, reflecting on the support the Bainbridge Department received from fellow firefighters nine years ago. "Our roof was ripped from a straight line wind. A lot of the communities around this district helped us out by housing our equipment. We had our trucks at different locations during that time until our roof was replaced and the building was redone on the inside."

The idea of donating the truck came about in April when several members of the Bainbridge Volunteer Fire Department recently attended the FDIC Conference in hopes of selling the 1990 GMC truck. While there, Assistant Chief Matt McGuire and Lt. Kevin Thorson and Hoke spoke to firefighter Matt Lovitt of the Pigeon Forge Fire Department, who was interested in spreading the word of the truck to other area departments. 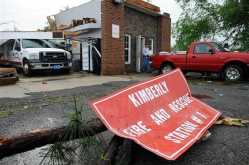 "It all started up at FDIC," Thorson said. "We took the truck up there to sell and as we were walking out there Lovitt was looking at it because he was going to put the word out around some of the Pigeon Forge area's fire departments because they had apparatuses dating back to the 1950s and '60s."

Weeks went by without hearing from Lovitt until Thorson reached out to see what the status was.

"I called him and at the same time he (Lovitt) was trying to find the notes where he wrote our numbers down," Thorson explained. "He goes 'I didn't know if you knew it our not, but our state of Tennessee had tornados the previous night.' He wanted the truck information again so he could put the word out."

The following day, Thorson spoke to Capt. Dustin Osborn, Hoke and McGuire and agreed that if a department needed the truck, they would donate it.

"We all agreed to donate the truck if there was a department that needed it because of the storm damage," Thorson said. "At that time that's when Matt Lovitt took over and he was working the past few days contacting state fire marshals from Tennessee, Alabama, Mississippi, Arkansas and North Carolina.

"From speaking with Matt, he said all of the fire marshals from the previous states, they said Kimberly, Ala., was the worst hit fire station from the storms."

After confirming that the Kimberly Fire Department would be the one to receive the pumper truck, several of Bainbridge members along with some from Pigeon Forge made the trip down to Kimberly's temporary fire station.

"We just figured we'd pay it forward," McGuire said. "It's still a viable truck, it's just not capable of suiting our needs. They lost two fire engines and their building completely collapsed on top of all their equipment. At the time, the department had four members inside, they all got out safely, but the storm destroyed the fire department and the church at the same time."

Along with the truck, Bainbridge and other area departments also donated fire extinguishers, ladders, hoses, turnout gear and boots.

The Kimberly firefighters still need to train on the truck. Once they do, they will be able to answer calls without help from neighboring departments.