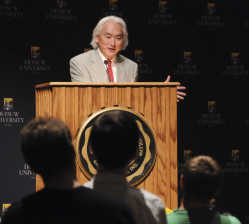 World reknowned physicist Michio Kaku speaks to students at Kresge Auditorium on Monday night as part of the Ubben Lecture Series. Kaku presented examples of how technology will improve the lives of everybody from paraplegics and sufferers of Alzheimer's to everyday mind control of appliances, robots and video games.

Tattoos, ties, technicolor tights, T-shirts, suits, rimless glasses, professors, retired couples, college kids; the crowd packed into Kresge Auditorioum to attend the lecture by noted physicist and futurist Michio Kaku on Monday night was as diverse as a crowd can get.

The range of people in attendance speaks to the interest in the ideas that Kaku has regarding how the future will look in the coming century.

He is a professor at the City College of New York and is co-creator of the string field theory, a theory which aims to complete the work that Einstein was unable to finish before his death that unifies physics from the smallest particles to the whole of the universe.

Kaku spoke of the ability to record memories and then re-insert them into a special part of the brain known as the hippocampus. This has in fact already been tested successfully in lab rats where a small chip was used to "record" the memory of how to drink water, then after some time when the lab rat had forgotten the task, scientists re-inserted the memory and the rodent immediately remembered how to complete the task.

Kaku's short-term goals are to create a brain pacemaker with this technology and completely change the day-to-day existence of those suffering from Alzheimer's.

Imagine, Kaku challenged the crowd, a world where an Alzheimer's sufferer forgets where he lives and cannot make it home, then with the push of a button he could have that memory brought back to his mind.

Kaku also discussed concepts of consciousness, symptoms of schizophrenia, epilepsy and paralysis as diseases which, with our advancing understanding of technology and the mind, could be alleviated or even cured in some circumstances.

Examples of completely paralyzed individuals fitted with special microchips were able to control their motorized chair, the internet, speech devices, operating mechanical arms using thought and even movies that involve emotions and feelings in addition to images and sounds were all presented as proof that Kaku's future may not be too far off.

And while Kaku discusses the amazing applications of these technologies, his utopian ideal seems to echo the dystopian concerns put forth by Aldous Huxley's novel "Brave New World" way back in 1932.

In the novel, Huxley creates a world where test tube babies are bred directly into a caste system where they are free of the concerns of disease, aging, pain, birthing and hygiene.

Movies in Huxley's world are no longer just images and sound on flat screens, but full-fledged experiences complete with emotions and pheromones, aptly named "the feelies."

The warning of the story lies in what else gets removed from the lives of the characters: books, thoughts, will, ideas, love, emotions, clarity of mind; in short individuality.

In 1947 Huxley wrote a foreward to his novel, just 15 years later stating "Then, I projected it 600 years into the future. Today it seems quite possible that the horror may be upon us within a single century."

And while Kaku's desire for the role technology in our life may indeed reflect a world we were warned warned of more than 80 years ago, the physicist took precaution to speak of the introduction of human ethics to the application of technologies.

"Science is not good or bad," Kaku explained, but that much like the scientific community has done with genetic research, a certain level of ethics must be applied when dealing with such base forces in human nature.

"We don't want to simply 'play with memories,'" Kaku acknowledged.

He also discussed Hollywood cinema mimicking reality, most notably the ability to upload ourselves into a computer, what Kaku calls the "Connectome."

Now, we wouldn't actually be alive or immortal in that scenario, but Kaku did explain that it could be a form of a recording in which you might be able to have a conversation with your ancestors or, given our present place in time, upload yourself for your descendants.

The connectome would be a digital recording of your brain, complete with all its memories and emotional ticks that could then be interacted with; and unlike movies like "Transcendance" and "Lawnmower Man," would have no more of a will than a tape recorder or a photograph.

In all, Kaku spoke of the benefits of the technologies that he and his colleagues are working on to aid humanity, and answered questions from the audience, mostly addressing the question of "just because we can, does it mean we should?" with a practiced and thought-out nuance.

For all his brains and his ability to explain very difficult concepts of physics to the average person, Kaku was also quite funny and likeable throughout the lecture.

He poked fun and quoted Bill Clinton, joked about why teenagers act so silly and why men suddenly become stupid when confronted by a pretty woman.

All of which, redirecting our thoughts through the lens of science, can be seen and turned into data-using brain scans.

For all the wonderment expressed by Kaku, and the possible pitfalls presented by the audience, the night was best summed up when Kaku quoted Yogi Berra early on in the lecture, saying "It's tough to make predictions, especially about the future."