Who's News for Saturday, May 17

ALICE MOORE of Greencastle, a member of the class of 2016 at Washington and Lee University, has earned dean's list status for the recently ended winter term 2014.

Dean's list status at Washington and Lee represents a term grade-average of at least 3.4 on a 4.0 scale. 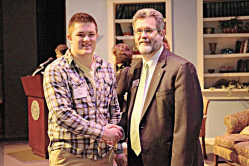 Wilmington College is a career-oriented liberal arts institution affiliated with the Society of Friends (Quakers). It is located in southwestern Ohio, approximately one hour from Cincinnati, Columbus and Dayton.

The Honor Society of Phi Kappa Phi recently announced that WENDY ROBINSON of Roachdale was initiated into Phi Kappa Phi, the nation's oldest and most selective collegiate honor society for all academic disciplines. Robinson was initiated at Florida Institute of Technology.

Robinson is among approximately 32,000 students, faculty, professional staff and alumni to be initiated into Phi Kappa Phi each year. Membership is by invitation and requires nomination and approval by a chapter.

Only the top 10 percent of seniors and 7.5 percent of juniors, having at least 72 semester hours, are eligible for membership. Graduate students in the top 10 percent of the number of candidates for graduate degrees may also qualify, as do faculty, professional staff and alumni who have achieved scholarly distinction.

Founded in 1897 at the University of Maine and headquartered in Baton Rouge, La., Phi Kappa Phi is the nation's oldest and most selective all-discipline honor society. The Society has chapters on more than 300 college and university campuses in North America and the Philippines. Its mission is "To recognize and promote academic excellence in all fields of higher education and to engage the community of scholars in service to others."

Putnam County Relay for Life recently named its team award winners for the 2014 event, which took place on April 26 at DePauw.

Most Participants on a Team: Gobin Church