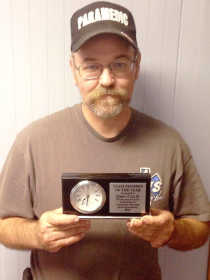 OL Executive Director Kraig Kinney noted that this is a pivotal year for Operation Life as the local ambulance service is entering its 40th year of service.

The organization was incorporated in October 1974 as one of the first rural paramedic provider organizations in Indiana, Kinney noted. It was founded (as the DePauw Fire Company) by a group of DePauw students in order to service campus and the surrounding community, and has since grown into Putnam County's primary provider.

"We value the residents and visitors of Putnam County," Kinney said, "and hope that we faithfully continue the traditions of the visionary DePauw students who founded Operation Life four decades ago."

During the crew recognition portion of the evening, Jerry L. Cox II was named 2014 Team Member of the Year, while Jessica Petticord was selected as the 2014 Hall of Fame inductee.

Executive Director Kinney noted that Cox is the first three-time recipient of the award, which is voted on by crew members, as well being a 2006 Hall of Fame recipient.

Cox thanked the crews for their continued support.

A paramedic and supervisor, Cox has been with Operation Life since Aug. 25, 1989.

Petticord's Hall of Fame recognition was bestowed by the administration and board of directors for service to the organization. She has been with Operation Life since Feb. 24, 1997.

Petticord, who could not attend, informed OL Director Kinney of her appreciation for both the honor and her role with the local ambulance service.

"Thank you for the award," she said. "OL has been a learning process in so many aspects over my 17 years, with not only employment but in life. I hope that I've been able to make a positive impact in someone else's career or in life along the way as many have done for me."

During the recognition banquet in the Operation Life Training Room, OL provided crew meals for all three shifts and many other extended care facilities. Air-Evac Lifeteam of Brazil and Putnam County Hospital also provided food and items such as T-shirts for the EMS staff.

National EMS Week brings together local communities and medical personnel who are on the frontline of medicine. The three goals of EMS week are: To promote EMS service within the community; to educate the public on safety and health-related topics; and to provide information on new EMS procedures or equipment.

It also marks the 40th year celebration of an organized EMS system in Indiana. Since the Indiana General Assembly created the EMS Commission in 1974, Indiana has now 24,000 EMS personnel, more than 100 EMS training institutions and in excess of 700 EMS providers.