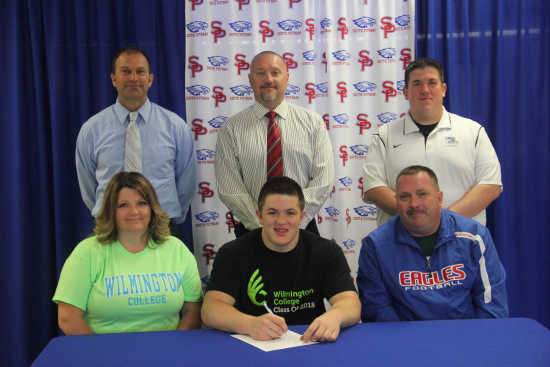 South Putnam High School will say goodbye to one of its better offensive lineman this spring, and Wilmington College will welcome him.

Senior Lane Hacker, signed his letter of intent Tuesday May 6. will be joining the Quaker football team this fall.

"I'm really excited," Hacker said. "It's a big deal to be playing football at the next level. Now I can help carry on the foundation that we started at South Putnam."

There were many factors that played a part in Hacker's decision making and among those factors were the academic values of Wilmington.

"It's a smaller school that's in my demographic," Hacker said. "It's an Ag based school. I really have an interest in agriculture."

Hacker will be majoring in animal science and will minor in agriculture business and signing he became apart of Wilmington's first recruiting class.

"The coaches are good guys," Hacker said. "They're trying to build a successful program. They've been working hard on their first recruiting class."

Hacker says he knows that he's had a lot of support getting to this point and is glad to have his family in his corner.

"Obviously the coaches, I couldn't be here today without them," Hacker said. "My parents have been supporting me, even through wrestling. They've been coming to every game especially my grandparents.

Like any mother, Nicole Hacker says she is excited for the opportunities awaiting Lane.

"I'm happy for him," she said. "He gets a good education and he can play a sport that he loves."