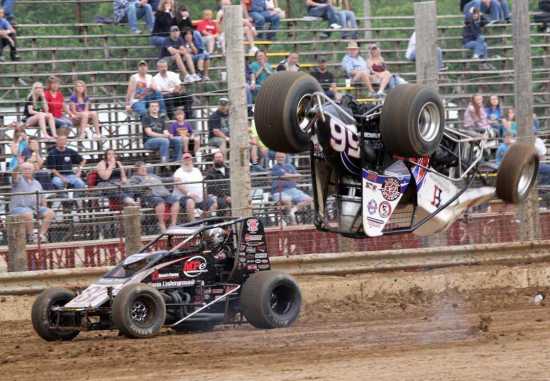 Levi Shields took a tough ride in his No. 56 sprinter on Saturday night. The tumble ended his night though he got out of the car under his own power.(Banner Graphic/CAREY FOX)

PUTNAMVILLE -- Over a three day racing span that was deemed the 'Josh Burton Memorial' weekend in honor of the much beloved Bloomington sprint car driver that was tragically lost in a crash two years ago, it was only fitting that his family's car was once again parked in Victory Lane.

Jeff Bland Jr. held off a furious challenge over the final handful of laps to pick up the $2,500 payday and the Midwest Sprint Car Series A-main victory at Lincoln Park Speedway on Saturday night.

The very popular victory was celebrated by Burton's family, friends and an ecstatic crowd at the Putnamville oval. 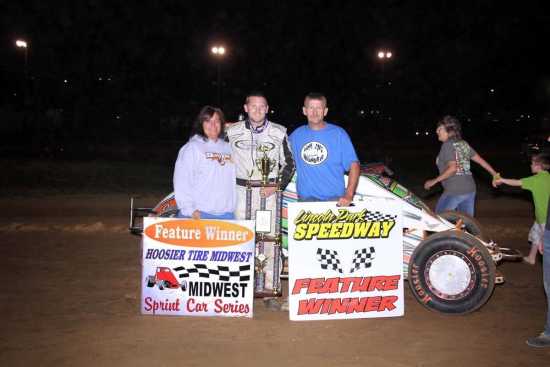 Steve Peeden debuted a special tribute car to Burton on Friday at Bloomington Speedway. The No. P3 super stock was covered with photos of Josh Burton during his racing career. This weekend, Peeden also parked his car in Victory Lane after fending off Doug McCullough, Kris Starks and Carmichael Sr.

The final feature of the evening was a super-sized bomber feature that started 27 cars. Tim Wright Jr. captured the win on the same night that his sister was married to add the icing on top of the celebration that was attended by a wealth of friends and family.

Wright pulled away late to gain the win ahead of C.J. Bryan, Jordan Almanza and David Kikendall.

On Saturday, 39 sprint cars were on hand in pursuit of the checkered flag on night two of the MSCS weekend.

Stanbrough put himself on the pole for the A-main with Bland alongside him as Brady Short and Chad Boespflug made up row two.

Bland and Stanbrough was the battle to watch over the first half of the 30-lap feature with Bland trying every angle and line to make his move.

However, the Brownsburg veteran, Stanbrough, made the bottom work to perfection despite Bland's early advances. Behind them, Robert Ballou had his hands full with Casey Shuman and Carson Short as Brady Short moved into the sixth spot.

At the midway point, Bland had made up enough ground to pull even with Stanbrough coming off the top of turn two.

The Burton No. 04 hopping and working the cushion to squeeze out every last bit of momentum. The line paid off on lap 15 as Bland shot just past Stanbrough to take the lead.

Brady Short would throw everything, but the kitchen sink at Bland over the last few laps, pulling wheel-to-wheel with the Burton Masonry car twice off of turn two.

However, Bland maintained the point and put the No. 04 car in Victory Lane.

The opening feature of the night had McClara and Carmichael Sr. on the front row ahead Carmichael Jr. and Gary Ricketts.

Carmichael Jr. jumped to the lead off a restart and had McClara on his bumper for the entire 20-lap feature. Carmichael Jr. hit his marks every time to keep McClara in check ahead of Carmichael Sr. and Carlos Bumgardner Sr., who moved up from the eighth spot.

In the UMP Super Stock feature, Steve Sutliff and Doug McCullough fought for the lead early on in the 20-lap feature as Peeden moved into third position ahead of Kris Starks.

By lap No. 8, Peeden got past Sutliff to take the point and wouldn't look back. McCullough and Starks were door-to-door over the latter half of the feature with Kenny Carmichael Sr. advancing from eighth to fourth. Once he got to the lead, Peeden held fast to it the remainder of the race to gain his first win of the season at LPS. McCullough came home second ahead of Starks, Carmichael Sr. and Josh Fagg.

The final race of the evening had plenty of competition with an extra seven cars starting the feature. Kevin Kemp and Lenny Krupa III starting on the front row ahead of Kikendall and Wright.

With such a large field taking the green flag, lapped cars proved a factor early on amongst the leaders. Wright got to the front by the fifth lap ahead of Kikendall and Almanza. However, nine laps in, Almanza advanced to challenge Wright out front. Bryan moved up from his 10th-place starting spot to take over third, but had James Walters, Kikendall and David Bumgardner challenging for the spot.

With five laps left, Wright had Bryan in his mirrors, but was able to hold on to that lead over Bryan, Almanza, Kikendall and Carlos Bumgardner.