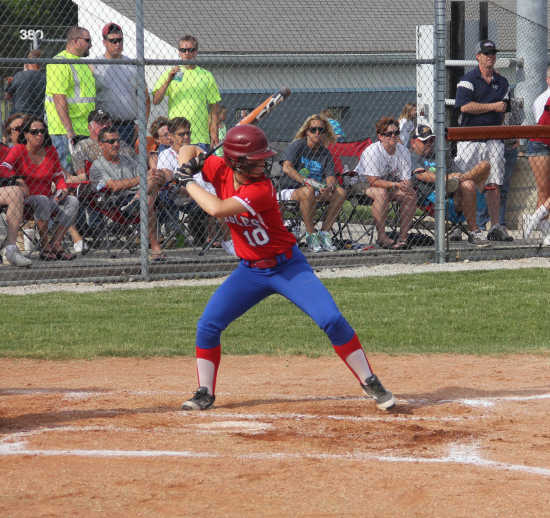 Katie Hewitt, a sophomore, is a bright spot in the Eagle's future. She went 2-for-3 in the loss to Cascade. (Banner Graphic/JOHNATHON GOODE)

CLAYTON -- Memorial Day 2014 was more than just a day of honoring our fallen soldiers. For many of the high school softball players around the state it was opening day of the IHSAA Softball Tournament.

Cascade holds its own sectional and to kick it off the Cadets played the guests against South Putnam (6-15 4-6 WCC).

Most people would have said that Cascade would win easily, but to a surprise, the Eagles stuck around.

"It feels really good," Eagles' coach Roshia Sullivan said, "I couldn't be more proud of the girls. I think we were the underdog for sure. We definitely fought and gave it our all. One good hit could've switched the game and turned it our way."

The Eagles were only down one going into the final inning of the night before giving up four runs to lose 8-3.

"I think they're just our core," Sullivan said, "They're our backbone. They're our leaders on the field. They're going to be missed next year tremendously. They carried our team this year and got us where we are."

Despite the loss, the Eagles have a lot to look forward to in sophomore Katie Hewitt. She was 2-for-3 on the night with a double off the wall in the fourth inning. She also recorded an RBI on the hit and later she reached on an error.

The major issue that burned both teams was errors. The Eagles had three errors alone in the first inning that led to a Cadet run. There were also two more errors in the third inning by the Eagles that put the Cadets up by two.

In the fourth inning it was a passed ball and an error that helped lead to a run and the double by Hewitt.

"I think we had a couple throwing errors," Sullivan said, "I was really proud of the girls for not letting one error turn into two. There were several innings were runners on and we got out of it. One inning we had a bases loaded situation and got out of it. I think that was really good for us. We didn't let one error get to us. We just kept playing."

Cadets' junior third baseman Brenna Sallee had three errors of her own. All three occasions were ground balls that went her way and then she threw the ball over the first baseman's head.

The seventh inning was the back breaker for the Eagles. The Cadets scored four runs. Two passed balls and four errors were to blame.

Sullivan was happy with her team's pitching. Cundiff pitched all but two outs of the game. Makenzi Myers pitched the other two outs.

"We had a senior on the mound," Sullivan said, "Like I said before this is her first year pitching. She carried this team. There is nothing more I could ask from her. I'm so proud of her."

It was a tough year for the Eagles, but it was a good way to lose to a top 10 ranked team. With Hewitt and the rest of the young Eagles' squad, there is definitely something to look forward to.