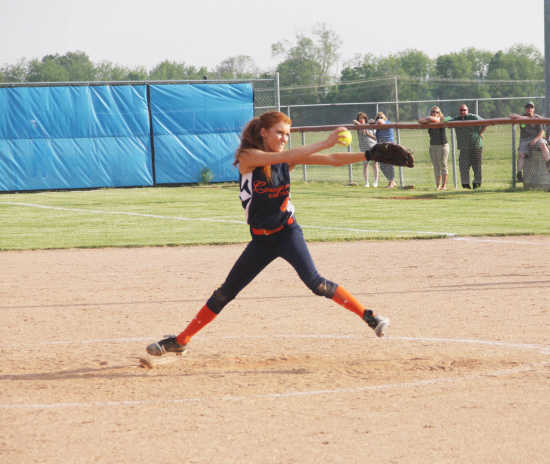 Senior Kayla Fish took the mound for the Cougars late in the loss to Monrovia. (Banner Graphic/JAY LOCKETT)

A good game came to a close Tuesday as did, the great season of the Cougar softball team. North Putnam loss in the first sectional round against Monrovia 13-1.

It was the teams' second game against the Bulldogs in seven days.

The game was not as lopsided as the score portrayed. 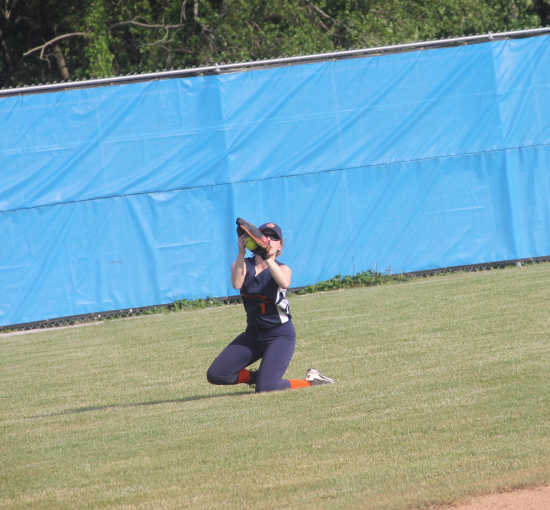 Sophomore Claire Simms makes a sliding catch in center field. She and Jazzmin Laffin made some great catches in the season finale. (Banner Graphic/JAY LOCKETT)

The Cougars were at a stalemate with the Monrovia team for the first two innings and jumped to a 1-0 lead when junior Jazzmin Laffin scored after her single. Junior Tyeann Strow walked and errors on Monrovia's side allowed Laffin to score.

In the fourth inning sophomore pitcher Reilly Tucker was challenged when runners were able to get on base and they were helped along by errors on the Cougars part.

Monrovia scored four runs that inning before North Putnam was able to force them out of the inning with runners on.

Batters were unable to get on base, as the Cougars only managed two hits after their run in the third.

Monrovia however had broken through the slump, scoring two in the fifth and seven runs in the sixth. Making the comeback trail a tough road.

"We stayed with them for five innings and then they just got up on us," North Putnam coach Benny Ault said. "I told my self ' if they got up I was going to play some girls and mix some girls around and give everyone an opportunity to play.'"

Keeping his word to himself, Ault allowed senior Kayla Fish to pitch and even allowed senior Madi Asbell to run the bases even though her arm was injured during the last game.

This rotation allowed other younger players to get into the field for the last game of the season.

"I wanted to get them some experience and I hope the parents would understand why sometimes their kids aren't playing," Ault said. "We held in there for so long. With Reilly being a sophomore pitcher, I think she handled herself. We just need more experience."

"My favorite memory was just being together in the dugout and cheering every body on," senior Bailey Ault said.

Fish took the mound with a smile on her face in the sixth inning after making some great throws to first from third knows that she and her cougar teammates left it all out on the field.

"It was a lot of fun going out there and giving it our all," Fish said. "I can definitely say we went out with a bang."

For Asbell, who took a fastball in the left arm while at bat in her last game but was still able to get out on the field Tuesday, the most enjoyable part was watching the team get closer throughout the tribulations of the season.

"My favorite part was just coming up with the different cheers together," she said. "We lost a player and we came back from that. We never gave up and it was always fine no matter what."

Though Benny Ault says that next years team will be special he will miss what makes his current team great as well.

"This is the best group of girls I've ever coached as far as attitude team wise and caring about each other," he said. "I couldn't be prouder of them in that aspect. They've never had their heads down. Even when we're down they're still in there cheering and trying to lift each other up. That's huge in my eyes."