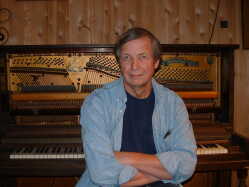 ROACHDALE -- From Beethoven to Blind Lemon Jefferson, boogie-woogie piano has ancient roots and modern-day practitioners, including Bob Milne, who will be performing Sunday, June 22 as part of the Roachdale Concert Music Series.

Milne will be the closing act of the sixth annual Roachdale Summerfest.

(No, Beethoven didn't actually create boogie-woogie music but there is a portion of his Piano Sonata No. 32 that has a striking resemblance to ragtime and boogie-woogie which is tough to ignore).

This type of piano playing was born out of the American blues movement of the early 20th century and to speak broadly of the style it involves piano-dominated arrangements that are often accompanied by a fast, rolling bass line with one goal in mind: To make people dance.

Milne has performed in Roachdale in the past and will be returning to perform at the Roachdale North Meeting House at 6 p.m. Sunday.

Interested parties may make reservations or contact the RRCA at roachdalerca@yahoo.com or by telephone at 522-1507 with questions about the event.

More information is available at www.roachdalerca.org.