Rib and Blues Fest a success for RRCA 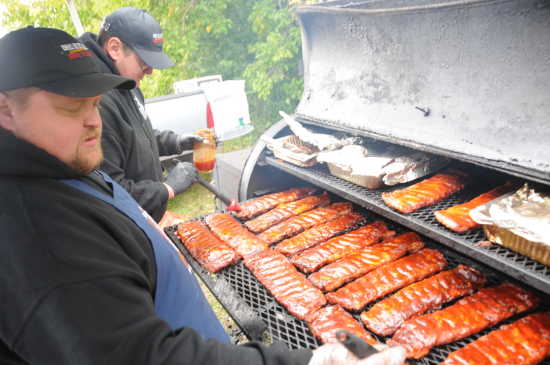 The Hog'N It All Barbecue team basting and saucing a smoker of ribs at the 2014 Rib and Blues Fest in Roachdale Saturday.

ROACHDALE ­-- Although the weather was chilly, Roachdale's Rib and Blues Fest received a warm welcome Saturday as music, barbecue and community collided with 40-degree temperatures and smiling faces.

Approximately 100 people were in attendance at any given time during Saturday's family-friendly event, including Indiana Secretary of State Connie Lawson, in what organizer Joe Buser is planning as an annual event for the first Saturday of every October.

"We'd really like this to turn into an annual event to have a huge impact on our community and our county," Buser told the Banner Graphic.

"And I really think we can do that."

At any given time nearly 50 people were enjoying the music and food, chatting amongst themselves with friendly smiles while another 30 people were inside the Northside Meeting house warming up and playing with their children.

Outside, musicians including Wing Nuts, Joel and Tosh of War Radio, Tad Robinson and Blues Side Up kept the entertainment going from the afternoon through the evening.

As people ate and drank in their various bundles of blankets, stocking caps and gloves, Joel and Tosh teased about how happy they were to be performing beachside in the Florida sand for the appreciative crowd.

Secretary of State Lawson was just one of the 10 barbecue judges, sitting alongside Susan Crosby, Gail Smith, Charley Riggle, Sam Fry and Mike Mahoy to decide who served the best barbecue ribs.

The event was spawned from an ever-growing backyard event and originated with RRCA board members Susan Leek and Kevin Kearns. As their "backyard festival" began to grow, it has now become a Roachdale Concert Music Series event.

Hog'N It All BBQ of Greencastle was on site to provide slow-cooked ribs, as well as pulled chicken and pork sandwiches to the hungry masses, running out of ribs before the sun went down and running out of sandwiches a short time later.

"We thought we'd have a decent turnout," Craig Allison, co-owner of Hog'N It All BBQ, said about the crowd.

"Everybody in the community came out in droves to eat barbecue and hear some good music."

Hog'N It All BBQ has been working to cater events like this since Allison, a road construction worker, was encouraged by his colleagues to start a barbecue business after they'd tasted his ribs.

Allison teamed up with Josh Salsmen to create the two person Hog'N It All barbecue team that was assisted by fellow barbecuer Tony Mann for the festival.

While Mann has his own barbecue team, he was on hand to cook the brisket alongside Allison and Salsmen for the hungry masses Satruday.

"It was a friendship made by barbecue," Allison joked.

Though Hog'N It All provided food for the event, they were not competing in the rib competition that was being held alongside local music.

Trader's Point Winery and Monarch Beverage provided wine and beer for the event while soft drinks and water were supplied by the Roachdale chapter of Delta Theta Tau.

Buser has already made a commitment for Rib and Blues fest 2015 on the first Saturday of October and hopes to eventually grow attendance numbers in to the thousands.

With the success of this year's event, next year's is expected to be even bigger, Buser said.

"Everybody loves barbecue and blues."