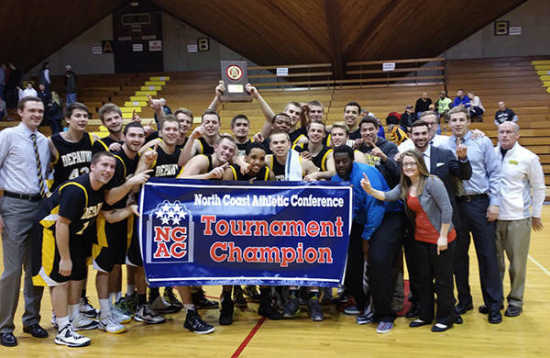 The Tigers pose with the NCAC Championship banner. (Courtesy Photo)

The Tigers moved to 19-9 on the year and earned an automatic bid into the NCAA Division III Championship for the first time since 2007. DePauw will learn of their tournament destination Monday, March 2, during the NCAA Selection Show scheduled for a 12:30 p.m. start.

Connor Rich got things started for the Tigers, hitting a three in the opening minute. Frank Patton III would net a pair of free-throws and Michael Onuorah added a layup, forcing Wooster to call an early timeout.

Leading 7-2 with 17:17, DePauw would extend the lead to 13-4 as Patton dropped in a three and Onuorah tacked on another layup. The Tigers held Wooster to single-digits until the 9:09 mark in the half when Josh Kipfer hit a pair of free-throws to make the score 15-10.

Following a nearly five minute scoreless stretch, Evan Pannell would sink four consecutive free-throws and Kipfer hit a layup to give the Fighting Scots their first lead of the half with 3:14 remaining.

Over the final three minutes of the half, DePauw went six-of-six from the charity stripe and Clint Cunningham made a jumper with 49 seconds left to put the Tigers up 23-22 at the halftime break. DePauw shot a woeful 23.8 percent (5-for-21) from the floor, but capitalized from the free-throw line, going 11-of-13 (84.6%) from the stripe.

In the second-half, Pannell put Wooster in front with an early layup, but Bob Dillon answered with a three just 11 seconds later to regain the lead. Pannell and Dillon would trade baskets followed by Patton's jumper to give DePauw a 30-26 lead with 17:11 left.

Trailing by four, the Scots would cut the deficit to one on Kipfer's layup with 10:25 remaining. After a Wooster missed free-throw, Rich tallied a layup and buried a three, sparking an 11-2 run for the Tigers.

With 5:31 on the clock, Xavier Brown scored six-straight points, forcing DePauw to call a timeout with a 52-45 lead. Out of the timeout, Rich tallied back-to-back jumpers to give the Tigers a double-digit lead.

DePauw's only points over the final 2:32 of regulation came from the free-throw line where they converted on 13-of-16 attempts, sealing the 13-point victory. The Tigers shot 83.3 percent (30-of-36) from the charity stripe led by Patton who went 15-for-16 and Luke Lattner who was 11-for-14. Their 36 free-throw attempts is the highest total for DePauw since 2011.

Patton paced all scorers with a career-high 20 points, while Lattner and Rich each added 15 points. Although Mark Johnson was held scoreless, the junior played a scrappy 25 minutes with nine rebounds, including four on the offensive glass. DePauw shot 40.5 percent (17-of-42) from the floor and 5-of-10 from three.

Wooster went 14-for-21 (66.7%) from the charity stripe and 21-for-47 (44.7%) from the floor. The Scots were held scoreless from three and their 56 point total is the lowest this season. Brown led the team with 13 points, while Pannell had 12 points and Kipfer totaled 11. Pannell and Dan Fanelly represented the Scots on the All-Tournament team.