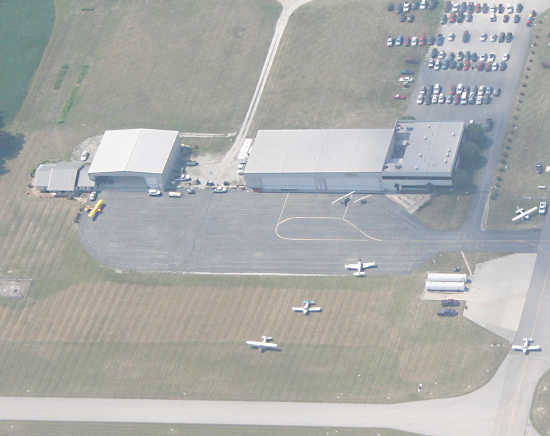 A proposed $2.75 million land acquisition by the Putnam County Regional Airport Authority has officially been scrapped.

Airport Authority Board members officially made the announcement this week that the authority and Dixie Chopper founder Art Evans had mutually withdrawn from their purchase agreement in place since October.

The proposal had been for the Airport Authority to aquire 17 acres of land adjacent to the airport as well as a residence, a hangar and the Dixie Chopper Business Center from Evans.

"Looking at it realistically, we wouldn't get anything done with it until June," Airport Authority President Duane Skoog said. "That seemed like a lot of time to tie up a private citizen's property."

The reason for the delay was the successful completion of phase I of a remonstrance process by citizens concerned with the ramifications of the purchase.

The land purchase was a challenging process from the beginning, with approval passing the Airport Authority Board by only a 3-2 margin.

When approval of issuance of bonds subsequently went before the Putnam County Council, there was similar disagreement, with passage by a 4-2 margin.

All along, the possibility of a remonstrance, with support of the dissenting Airport Authority Board members, hung over the process. Following County Council approval in November, the remonstrance process started, with the requisite 100 signatures collected from registered voters opposed to the purchase.

Reaching the magic number of 100 set up a long process that involved verification of signatures, a "cooling off period," another period in which supporters of both sides gathered signatures, followed by more verification and cooling off.

Evans and the Airport Authority simply came to an agreement that it wasn't worth the trouble.

Skoog said he looked on the final outcome as a victory for the democratic process.

"If phase I occurs, it means there's a pretty significant opinion against it," Skoog said. "The way I look at it as a member of the Airport Authority is I'm here to represent the people of Putnam County.

"The most important thing about this is, the system worked," he added. "You may not like the outcome, but you don't get 100-percent agreement on anything."

"It was going to be a taxpayer-supported initiative," Bothwell said. "Property taxes were going to go up -- not much -- but the tax levy for the airport has gone down because of this."

What hasn't been solved is the "residential through-the-fence agreement" with Evans that triggered the entire process.

The essential problem is that Evans, or any future owner of his residence, has a private access point to the airport, a condition strongly disapproved of by the Federal Aviation Administration (FAA). The continued existence of the problem could affect future federal funding for airport projects.

On the other hand, the board has time to work through the issue.

"At this point, no one's pointing a gun at our head,"

"There needs to be a deliberate and well-planned path toward resolution," Skoog added.

Regardless of any of this, both men emphasized that operations at the airport remain unchanged.

"Whether or not this transaction would have happened, it does not affect the operations at the airport," Bothwell said.