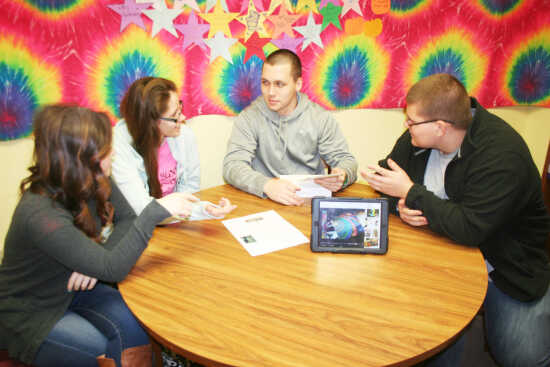 Brooklynn Buchanan, Sam Newcomer, Zach Secrest and Cody Lewis participated in the blog and photo contest for National Drug Facts Week, which was in partnership with the campaign Sam's Watch. The four students worked together under the direction of teacher Pamela Bacon in the Library Media class.

The submission, titled "Murder the Myths", was completed under the pseudonym Brody Newcrest, a combination of the students' names. The students were recently awarded an iPad as the regional writing contest winners. Their submission will be featured on the national blog at www.samswatch.org.

Buchanan explained the project stemmed from an online campaign started by a woman named Jeanine Motsay. Her son, Sam, passed away after using the synthetic drug knows as N-BOMe (pronounced n-bomb). The Center Grove student focused on academics and played sports. He tried the drug after being told it would not show up on a drug test.

"The n-bomb is actually a synthetic LSD, that they dip designed paper into the drug. They cut it up into little squares," Lewis explained about how the drug is presented.

The group worked together to decide how they would compile their submission, and started the blog submission by writing a letter to Sam. The letter stresses the importance of using the circumstances in his death to educate youth about the dangers.

The letter states in part, "More teens need to know what the drug is, and the dangers it is capable of after just one time. Your mom is spreading the word and shattering the myths that surround this designer drug, often known as LSD."

The students admitted they were shocked to learn that the first and only time Sam Motsay used an illegal substance was able to take his life. The second part of the blog focused on specific examples of youth that had also died after using drugs just one time.

The second part of the blog, titled "Into the Grave?" lists the names of more than a dozen young people that died after using drugs for the first time.

The final entry in the submission focuses on the brighter side of a bad situation. Sam's mother is using this experience to educate students about the dangers of using drugs, even if they only try them once.

The students described Jeanine Motsay's recent convocation at the school in a final letter to Sam in the blog by saying, "Sam, if you could've seen the way your mom pushed back tears as she talked about you, and hear the way her voice shook, I know you would've thought twice about taking the N-Bomb ... The myth that 'time heals all wounds' is just as untrue as 'just this once' won't hurt you. Your mother's heart has been shattered, but she will continue to pick up the pieces of her broken heart until the dangers that killed you and the temptations to believe the myths are buried beside you."

Newcomer added a few photos to the blog entry. She visited a local cemetery to take photos of the graves, in hopes to make an impact with the visual aids.

"I think the pictures of graves set in stone -- literally in stone -- that one time can stop your life," Newcomer said.

While the project's goal was to educate other students, the Library Media class said they also learned a lot from the project. For example, none of them had heard of this drug.

"It makes you wonder what other drugs are out there that you no idea what they are," Secrest said, adding this project has sparked conversations with their own friends.

Buchanan added, "The goal (of the project) was to get into the audiences' minds. Every kid hears 'don't do drugs', but they blow it off. We really wanted to get into their minds and affect their lives. Because teens like to be self-centered and be in their own world. We wanted to enter into their world and shake them up a little bit."

Bacon noted she was very proud of her students for working together to get the project done considering they learned about it late. The students had less than a week to complete the project. She stressed the project fits perfectly into the purpose of the class, which focuses on research, English and writing.