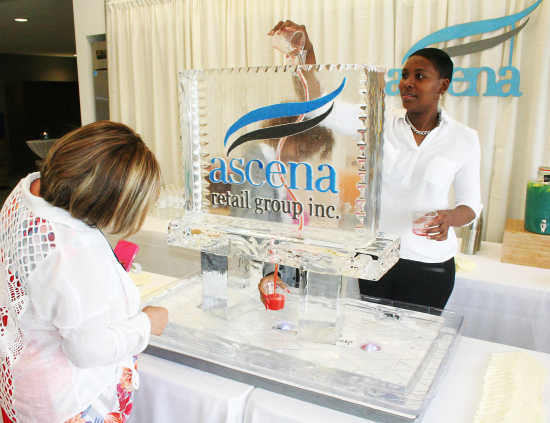 Big Bounce Fun House Rentals of Greencastle created one of the more unique aspects of Thursday's reception and ribbon-cutting ceremony at the Greencastle Ascena facility -- an ice sculpture in the form of the company logo used to cool fruit drinks poured through it. Khara Smith does the honors for visiting Tami Van Rensselaer of the Greencastle/Putnam County Development Center. (Banner Graphic/Eric Bernsee)
Order this photo

Yet three years after the old "Big Blue" facility was acquired by Ascena Retail Group Inc. with the purchase of Charming Shoppes in 2012, that's exactly what has happened.

Calling it a "transformative event," John Sullivan, president and chief operating officer for Ascena, told company officials, invited guests and assembled Ascena associates that such a project almost never got off the ground. 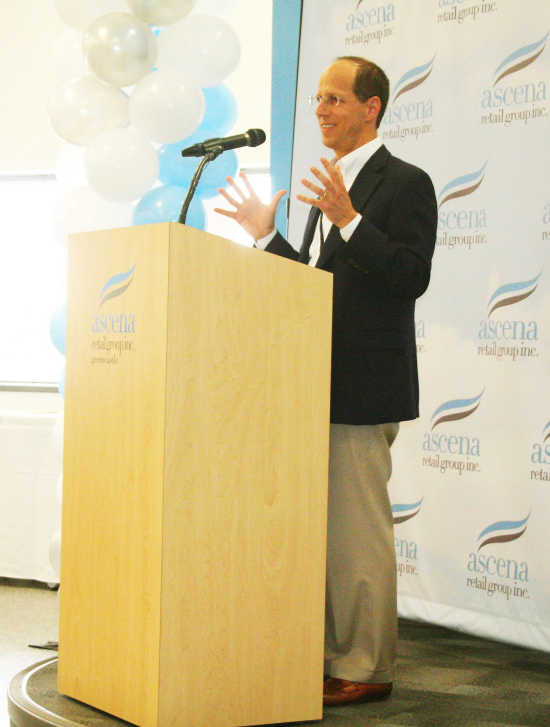 Addressing assembled guests, Ascena officials and local associates Thursday afternoon, David Jaffe, president and chief executive officer of Ascena Retail Group Inc., talks about the investment in the future his company has made in Greencastle with the recently completed transformation of the old F.B. Distro distribution center into a world-class e-commerce fulfillment center. (Banner Graphic/Eric Bernsee)
Order this photo

Sullivan recalled how he learned that Ascena was purchasing Charming, calling it an "acquisition with gifts" as he was sent to check out the "Tired, old pallet-based" distribution center that was originally built by IBM in 1954 and vacated by the computer giant in March 1987 when it donated the building and property to the city for economic development purposes.

"My first inclination," Sullivan admitted, "was 'We're going to sell it.' And I meant that."

But the more he met with those involved with F.B. Distro and local officials, he kept hearing, "You don't want to sell this building, John, this building is special."

Yet as Sullivan looked around, he "saw a building that needed work."

But he also saw the Ascena company core values of integrity, excellence, respect, passion and sense of community embodied in the workforce he was inheriting in Greencastle.

And the transformation of the building into the 800,000-square-foot national e-commerce fulfillment center that was unveiled Thursday is testament to the "tremendous resiliency and hard work" of those associates during the transition, he said.

"Clearly this building has undergone a transformative change," Sullivan added,"and is arguably a world-class e-commerce fulfillment center capable of serving our five brands and many, many more in the future.

"What is the capacity?" he asked. "We had that conversation today."

Ascena Retail Group President and CEO David Jaffe said he was on the trip with Sullivan when they first laid eyes on the building they celebrated on Thursday.

"It's turned out to be real blessing," Jaffe said, adding, "What we do here in the Ascena mission."

In a facility that is designed to do 400,000 units at its peak, Jaffe said Ascena "can do, as we like to say, it faster, smarter and better than our competition."

And the new Greencastle facility gives Ascena "a sustainable, competitive advantage," he stressed.

In celebrating the completion of the facility's transformation into the "world-class e-commerce fulfillment center," Jaffe says he looks forward to growing with Greencastle.

Senior Vice President of Distribution Steve Daley Sr., who manned the ceremonial scissors in the ribbon-cutting event, wanted to share his take on the initial examination of the facilities.

It came with "a lot of anxiety about this building and the ability to convert it," Daley said. "But we never questioned the workforce here."

Mayor Sue Murray spoke on behalf of the community, noting that "being in this building is a reminder of Nov. 11, 1986 when the builder of this building, IBM, said 'we can't make it here anymore.'"

Those emotions again arose with the 2011 negotiations of the F.B. Distro sale to Ascena and the uncertainty of the local facility's future, she said.

"A lot of heart palpitations went on for several months as Ascena made its decision," Mayor Murray said. "You did all come to understand the people who work her and their dedication is what makes Greencastle a special place." 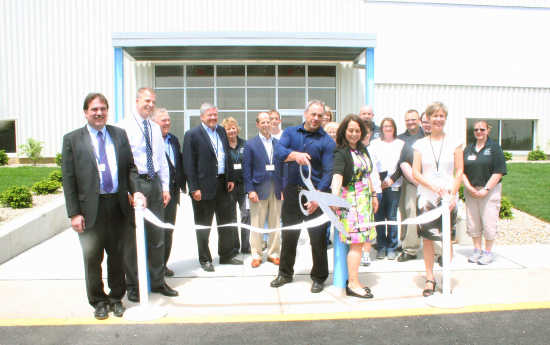 The mayor added that she and other city officials "look forward to a bright and promising future" working with Ascena.

She did note that none of the five brands Ascena ships out of its Greencastle facility has a retail store locally.

"Mr. Jaffe noted there were some empty retail spaces around town," she smiled, "so ..."

The ribbon-cutting ceremony Thursday afternoon marked a 18-month-long transformation from a retail distribution center to an e-commerce fulfillment center.

A reception prior to the ribbon-cutting event featured hors d'oeuvres, a candy bar and signature Ascena fruit drinks created for the occasion and poured through an ice sculpture of the company logo made by Big Bounce Fun House Rentals of Greencastle.

The facility, with its highly efficient material-handling equipment and systems, is home to 350 employees.

"The opening of this facility was a huge undertaking for the team," Sullivan noted. " I am so impressed with their passion in helping us crystallize our vision.

"In addition to thanking our team," he continued, "I'd like to extend my gratitude to Putnam County. The residents of this area have been wonderful neighbors and we believe that by working together, we can continue to create new jobs and further grow the local economy."

During the program, Ascena, which prides itself on giving back to the community, presented a $12,500 check to the Putnam County Community Foundation for the creation of the Ascena Retail Group Community Endowment.

That $12,500 immediately becomes $37,500 as the Lilly Endowment is matching such Indiana donations. And those funds were also matched in kind by the Foundation itself, represented at the ceremony by board President Todd Lewis, Vice President Ken Eitel and Dean Gambill, Foundation director of community development.