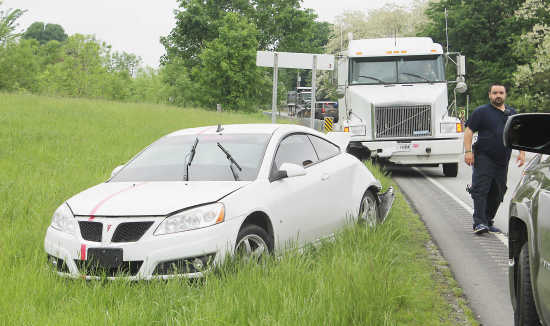 BRICK CHAPEL Ł-- Two people went to Putnam County Hospital Monday morning after a semi rear-ended the car in which they were traveling.

Driver Mark Poore, 34, Bainbridge, and back seat passenger Cassie Delp of Clinton were transported to PCH by Putnam County Operation Life with complaints of pain. The injuries are not believed to be serious.

Putnam County Sheriff's Department Sgt. Gregg Slover said the accident occurred as a southbound vehicle on U.S. 231 was waiting to turn left into the north entrance of Brick Chapel Cemetery. 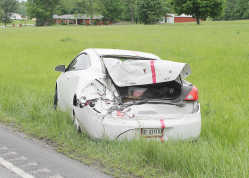 The Pontiac G6 Poore was driving was the third car in line.

The semi driver told Slover he did not notice the stopped traffic until it was too late.

The right front of the semi tractor made impact with the left rear of the vehicle, causing extensive damage to the truck area.

A third occupant of the Pontiac, Amanda Lindley of Kingman, was not injured.

Traffic was reduced to one lane following the accident, with deputies keeping the northbound lane open.