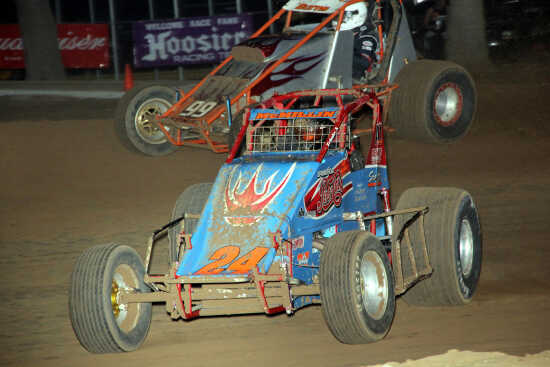 PUTNAMVILLE -- It was another beautiful night for racing at Lincoln Park Speedway and the pits were full on Saturday night. AJ Hopkins picked up another sprint car win at LPS with Tyler Nicely adding his second straight UMP Modified victory at the Putnamville oval. Steve Peeden continued his domination at Lincoln Park, winning his eighth UMP Super Stock win of the season and AJ Smith added another bomber victory to his list.

Hopkins put on a dominating show in the sprint car division cruising away to a big win in an action-packed sprint car A-main that saw some cars upside down and not surprisingly, some flaring tempers.

Starting on the pole along with Mike Gass, Hopkins jumped to the lead from the opening green flag and didn't look back. By the fifth circuit, Hopkins had built a sizable lead as Gass, JJ Hughes, Kent Christian and Jeff Bland Jr. raced for the second spot.

Hughes advanced to second with eight laps in the books as Hopkins had a straightaway lead before Scott Hampton made contact with Conner Donelson down the back stretch. Matt McDonald flipped hard into turn three to bring out the red flag on lap 10. McDonald would be checked out by medical personnel in the pits.

When the field went green again, some of Hopkins main competition pulled off the track as Hughes broke a front end and Bland pulled to the pit area as well.

Kent Christian ran second ahead of Hampton with nine laps left, but Hampton bobbled slightly as Hopkins pulled away. Bub Cummings made his way up to the third spot ahead of Chris Phillips and Chris Babcock at the checkered flag. Gass and Shane Cockrum got together following the conclusion of the race as Gass got upside down.

In the UMP Modified A-main, Jeff Deckard paced the field early on before Nicely reeled the leader in and went door-to-door for several laps ahead of Tim Prince, Jay Humphrey Jr. and Derek Groomer. Nicely would take over the top spot at the midway point and, once he broke free, began to pull away.

Deckard and Prince battled for the second spot as Groomer was able to edge past Humphrey for the second position. Prince got past Deckard briefly for second, but would eventually see Deckard regain the spot before the final lap. Up front, Nicely rolled away to his second win in as many weeks as Deckard, Prince, Groomer and Humphrey Jr. wrapped up the top-five.

In the UMP Super Stock main event, Peeden started on top and finished in the same position.

Larry Raines took some early shots at the lead, running second through the first five laps ahead of Doug McCullough before Josh Boller chased them down around the top side to take over the runner-up spot. Lapped traffic would play a role over the final five laps as Boller closed in on Peeden with two laps remaining, but was unable to get any closer than a couple of car lengths at the finish line. Raines came home third ahead of McCullough and Kenny Carmichael Jr. as Jonathon Newgent came forward from 13th to place sixth.

In the final feature of the evening, Smith and Jordan Almanza battled lap-after-lap in tight formation on the bottom. Smith held fast to his line as Almanza showed his nose to him a couple of times in the 15 lap event, but was unable to get by for the pass.

Smith picked up the victory as Ryan Freeland came home third ahead of RJ Pruitt and Josh Settles.