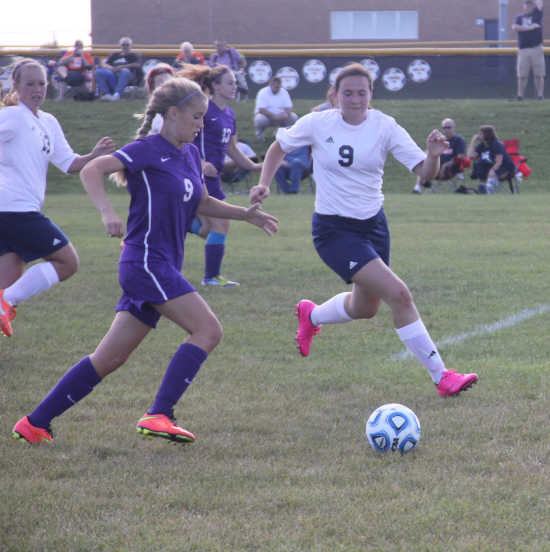 Greencastle's Madeline Graham (9) tries to push past Emilee Henninger (9) of North Putnam in the first half of the county soccer gaame Thursday. (Banner Graphic/JAY LOCKETT)

ROACHDALE -- A physical and exciting girls' soccer game with Putnam County rivals Greencastle and North Putnam ended in a 1-1 tie. The anticlimactic finish was in accordance with the new WIC rules in which goals scored are carried throughout the season and the team with the most goals scored in each the eastern and western division compete in the WIC Cross-Over Game for the WIC championship.

The soccer match at North Putnam ( 1-1-0, 1-1-0 WIC) was a stalemate up until the end of the first half with both teams taking shots on goal but with goalies holding strong.

Greencastle (0-1-1, 0-1-0 WIC) who had the benefit of freshman Claire Gillen at goalie, was able to play senior captain Amelia Smith in the field giving the Lady Tiger Cubs a strong offensive and defensive presence. Gillen had 16 saves.

The Lady Cougars however, were able to withstand the many corner kicks and shots on goal early with senior Claire Sims at goalkeeper.

"It's been a weird season," NPHS coach Chase Hiland said. "We've had two starters get hurt already. So we've to adjust on the fly and put people in place that they didn't expect to play. I'm proud of what they've done."

North Putnam didn't give up any goals scored in the first half and while attempting a shot on goal just before the half GHS was called for pushing in the back and the Lady Cougars were awarded a penalty kick to end the half.

Kaelynn Abner took the kick and was able to score North's only goal of the evening.

The second half saw a more aggressive Greencastle team who ended the game with 27 shots on goal. Greencastle earned its goal when Simms fell down and lost control of the ball in front of the Cougar net. Bailey Lausee was there for Greencastle and tapped the ball into the goal for the tying score.

Greencastle coach Angela Weeks expressed excitement at her Tiger Cub team, that is filled with talented players both young and older.

"Claire Gillen is a freshman," Weeks said. "She is debuting very well. We are showcasing a set of seniors in our midfield with Katie Rose Parsons and Amelia Smith. Our senior leadership is doing a great job. This one got in our heads but we came out with a tie so I'll take that."

North Putnam's players shared Weeks feelings about the draw as many Cougars were hoping for a chance to earn back the Golden Boot that Greencastle currently holds.

"I know they really wanted to win the trophy back," Hiland said. "But it just wasn't there today. We didn't get that goal we needed but I'm proud of what they did.

Greencastle will next face Crawfordsville on Monday followed by North Montgomery on Tuesday. North Putnam will play Cascade on Saturday.