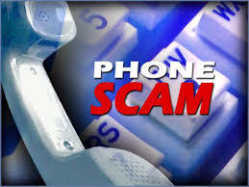 Someone claiming to be from the IRS calls and says the resident or residents owe the agency for past-due taxes and face fines and jail time if they don't remit post haste what is owed.

Scammers usually request that the money be paid back through the purchase of pre-paid cards.

The IRS phone scam continues to be the most common telephone privacy complaint being reported in Indiana, according to the Attorney General's Office, which has received more than 500 complaints about the IRS scam in 2015 alone, and had more than 1,100 complaints in 2014.

Amazingly, the IRS says more than 1,000 victims actually have fallen for the scam, sending more than $5 million so far to someone in Nigeria or Canada or Kathmandu as people are either wiring money or purchasing pre-paid debit cards and giving them the card number, all in an attempt to avoid a bogus arrest.

Scammers are targeting thousands of people with these calls, and even if you don't pick up the phone, they'll hound you by leaving a frightening message on your answering machine or voicemail.

Like them or not, the IRS assures it will never call and threaten you with arrest. It doesn't even have arrest powers.

And it's important to know that if there is a real problem with a tax filing, you will get a certified letter via mail, stating what is wrong and explaining your rights. The IRS will never demand payment on the spot.

As with any unsolicited telephone call, it is important not to give out any personal data such as birthdate, Social Security number or credit card information, Marshal Fenwick reminded.