The old trickle-down theory most often is associated with economics, not police manpower.

After all, it was critics of the old "Reaganomics" policy that revived a notion first attributed to Will Rogers during the Great Depression. The noted humorist opined about money being appropriated for the top in hopes it would "trickle down to the needy."

Recent developments in the Greencastle City Police Department, however, are proof that the trickle down can affect personnel as well. 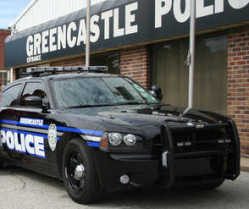 After all, the retirements of three longtime officers in recent months -- Capt. Mike Hanlon, Sgt. Terry Eastham and Officer Albert Epple -- not only left a void in local police manpower but in veteran leadership as well.

That's why Police Chief Tom Sutherlin was in front of the Greencastle Board of Public Works and Safety this week, seeking approval for a series of promotions within his department.

With those retirements leaving leadership capacities to fill, Chief Sutherlin said it has been several years since the last such promotions within his department.

The GPD Board of Captains, he explained, unanimously recommended the promotion of Sgt. Charles Inman to the rank of captain, filling the void left by Capt. Hanlon's retirement.

In turn, the elevation of Inman to captain, created a third sergeant's position to be filled at GPD.

The Board of Captains interviewed five candidates for the three sergeant positions, recommending the promotions of Det. Michael Collins, and Officers Ed Wilson and Eric Vaughan.

The promotions are effective with the new pay period beginning Aug. 22.

The Board of Works unanimously approved the promotion recommendations presented by Sutherlin but not before hearing some compliments from board member Trudy Selvia.

"I've heard good things about what's going on at the police department," she said, indicating there seems to be "a new sense of pride; a new sense of family."

With the recent hirings of Josh Smith, Brad Hiatt, Zachary Rhine and Elsiana Crosby, the City Police Department will soon be back at full strength at 16 officers, Sutherlin noted.

Crosby, who was recently chosen to fill a vacancy created by Jeff Modlin's resignation, is awaiting the results of her physical for PERF (Public Employee Retirement Fund).

"We're hoping in about four to six weeks from now we can have another swearing-in ceremony," Chief Sutherlin said.

The full effect of a complete police department staff, however, won't really be apparent at GPD until next February.

Smith, Hiatt and Rhine are all scheduled to attend the 16-week Indiana Police Academy training session starting in November with graduation due in February 2016.