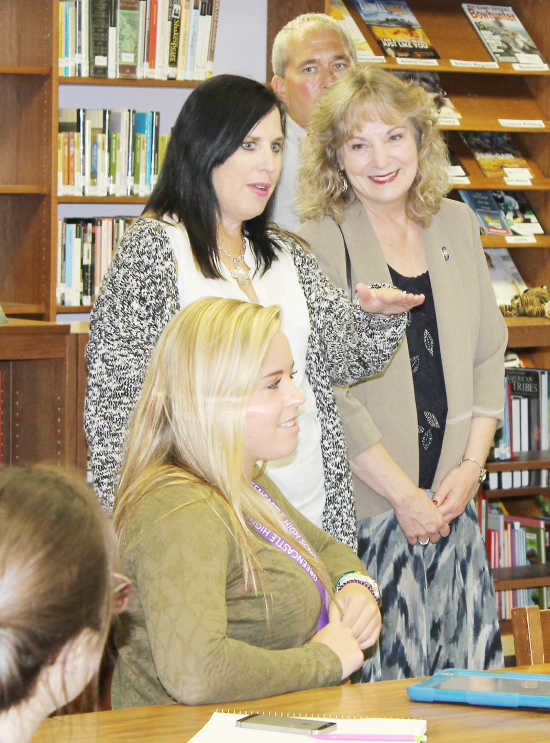 From traditional picture books to iPads and 3D printers in the classroom, modern public education covers a lot of ground.

Indiana Superintendent of Public Instruction Glenda Ritz got a taste of all that and more in a rapid tour of four Greencastle Community School Corporation schools Monday afternoon.

A sign outside the Tzouanakis office welcomes Glenda Ritz to the school.

Greeted at each building with a mix of marquee welcomes and hand-made signs, Ritz began her time in Greencastle at Tzouanakis Intermediate School, where Principal Jon Strube showed off a number of programs at the school, including a class full of students using their recently acquired iPads, a product of GCSC's recent expansion of its 1:1 program into the intermediate school. 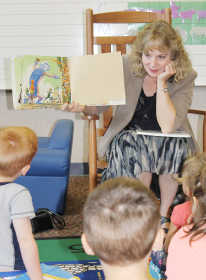 Ritz, a school library media specialist before her days in politics, spent time in the Tzouanakis library with two third-grade classes, reading "Art and Max" by David Wiesner and "There Was an Old Lady Who Swallowed Some Books" by Lucille Colandro.

During the library session, Ritz introduced the students to her "Hoosier Family of Readers" initiative, which aims to build a culture of reading in Indiana by asking "Who is your reading family?"

The reading continued as Ritz reached Deer Meadow Primary School, where she shared a pair of books with Kari Schimpf's preschool class.

Schimpf's class was treated to a reading of "Art and Max" as well as "One" by Kathryn Otoshi, with Ritz putting special emphasis on the anti-bullying message in Otoshi's book.

Taking Ritz around Deer Meadow, Principal Mike McHugh made sure to briefly introduce the superintendent to each classroom in the school.

At Greencastle Middle School, the talk returned to technology, with a discussion of 1:1 methods and technology in the classroom with Principal Shawn Wooden and several faculty members.

Ritz praised the group for its efforts and encouraged the teachers to continue to seek out new methods and quality materials in the new medium.

The last stop at Greencastle High School began with a celebration of the school's decorated history in the Indiana Academic Super Bowl. Ritz, along with GHS faculty members and academic coaches, watched as members of the 2015 English, interdisciplinary and science teams added "'15" to the already crowded sign that lists the school's 22 academic state championships.

A 2015 listing was also added to the "State Top Ten Percent" category, an honor GHS has earned five straight times and six times in seven years. 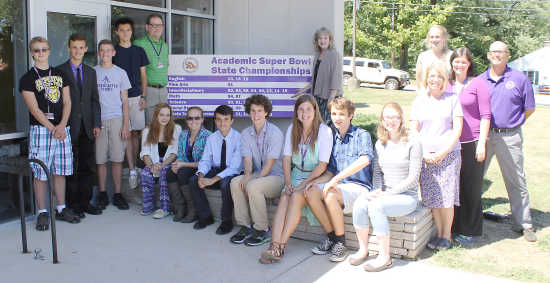 Moving into the classroom, Ritz got a quick introduction to the use of technology in GHS classes. Bradley Key's psychology class was studying the different technology used for brain scans, while Ritz got to see the newly-acquired 3D printer in David Basan's industrial technology making a model of Big Ben in Greencastle's trademark purple.

Glenda Ritz discusses the use of technology in the classroom on Monday at Greencastle Middle School.

Talking with librarian Pam Bacon's students, Ritz was asked why she opposes the A-F school grading system imposed by the previous superintendent's administration.

Although the tight schedule did not allow time for Ritz to visit Ridpath Primary School, the Ridpath teachers were invited to GHS after the final bell to have an audience with the superintendent, sharing their thoughts and asking questions of the state's highest-ranking education official. 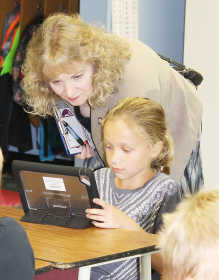 Taking a peek over the shoulder of Sophia Riggle (seated) Monday afternoon, Superintendent of Public Instruction Glenda Ritz gets an up-close look at the 1:1 technology being implemented in Jennifer Miller's fourth grade classroom at Tzouanakis Intermediate School.

The same opportunity was afforded GCSC Superintendent Dawn Puckett, who was with Ritz throughout the tour, and the five school board members, each of whom attended at least some portion of the tour.

Ritz staffer Steve Walsh said the state superintendent spends two to three days on the road each week, making similar visits to schools throughout the state.