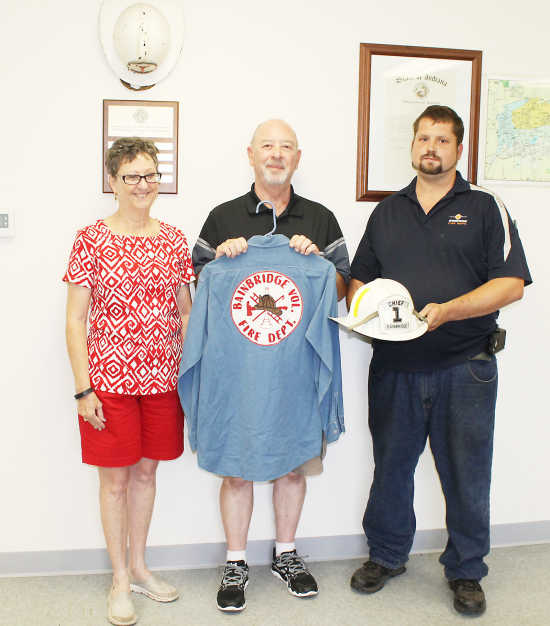 A simple Facebook post by a former firefighter is now providing a link from current members of the Bainbridge Volunteer Fire Department back to the department's very roots.

While going through some stored items at his Greencastle home recently, Russ Evans found a little piece of history -- his father Charles Evans' uniform shirt from the department's early days.

The elder Evans was one of nine organizing members of the Bainbridge Community Fire Department back in 1952. 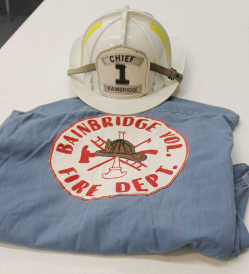 A uniform shirt from the 1950s and a chief's helmet from the early 1970s will soon adorn one of the office walls of the Bainbridge Fire Station. Both pieces once belonged to Bainbridge Volunteer Fire Department founding member Charles Evans and will hang beside a plaque with the names of the nine founders. (Banner Graphic/JARED JERNAGAN)

In his nostalgia, Russ -- a 24-year member of the department himself -- shared the picture on Facebook as a #ThrowbackThursday post.

When current BVFD member Joseph Smith saw the picture, he asked Evans if he could buy the shirt on behalf of the department.

"I told him I would donate it to the department," Evans said.

So the donation was made at the department on a recent Sunday evening, with several members of the Evans family and nine current Bainbridge firefighters on hand.

The artifacts are set to be displayed on a wall in the Bainbridge Fire Station office, right next to another old officer's helmet and a plaqued bearing the names of Charles Evans and his eight fellow founders -- Gordon Hanks, Bill Harlen, Gene Hough, Wayne Mark Sr., Wayne Mark Jr., R.D. Ross, Ernie Roth and Vic Walters.

For many years, Bainbridge Fire Departmetn served the largest land area within the county stretching from the Hendricks County line all the way to the Parke County line, which included all of Clinton and Monroe Townships plus the northern half of Floyd Township and the southern part of Jackson Township.

This lasted until the mid-1990s when Jackson Township became part of Roachdale Community Fire Protection District and 200, when both the Walnut Creek and Floyd fire protection districts were formed. 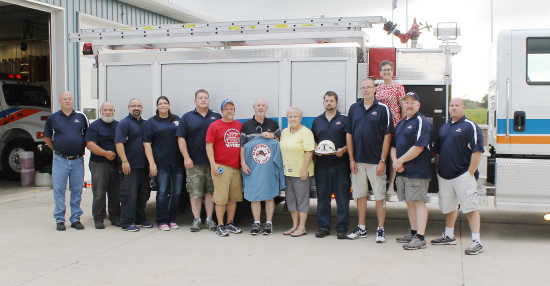 After this, the coverage area of BCVFD became basically all of Monroe Township and parts of Clinton Township. Currently BCVFD responds to those areas, plus Floyd Township for runs along US Highway 36 east to Groveland and north to the Jackson township line.