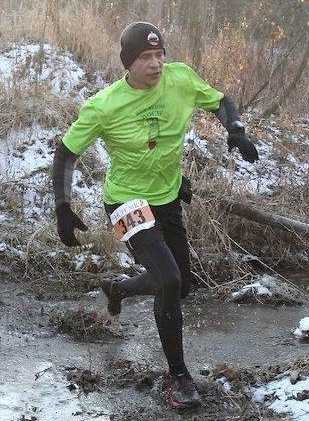 Local runner Michael Scott tests the elements during a run this winter. Scott may grace the cover of Runner's World magazine this December. (Courtesy photo)

EMMAUS, Pa. --When Runner's World magazine set out to find the nation's "most awesome" runners this year, it may have been surprised to find one right here in Greencastle.

Michael Scott, a Greencastle native, has officially made it into the top 10 out of an original 1,600 entries in the periodical's 2015 Cover Search contest. The overall winners will be announced during the 9 a.m. showing of NBC's the Today Show on Oct. 29 in New York.

Runner's World Editor-in-Chief David Willey unveiled the Top 10 list on recently. This list of finalists includes five men and five women with two overall winners still to be selected through an online voting process. One man and one woman will grace the December issue's cover as the top winners of the contest, which is presented by Tag Heuer.

Scott's reasons for running are not only for himself, but for others who want the same for themselves.

"I run because I love the feeling of running -- I run to inspire others to get out the door and get healthy," Scott said. "At 42 years old, it has made me a stronger, healthier person. I'm in the best shape of my life all because I decided to get up off of the couch one day and make a change.

"I run because I love the sport."

The 10 runners selected by Runner's World are as diverse as the country itself; Illinois claims the most with two.

"We went looking for two awesome runners to appear on the December cover of Runner's World," Willey said in the press release. "What we uncovered were thousands of inspiring stories -- how lives were saved, altered or made whole by running.

"Getting to 10 finalists was agonizing in the best way," Willey added. "We salute everyone who shared their personal story. There are no losers here."

Scott began running as an adult in 2011, taking less than a year for him to run a marathon and an ultra marathon of 55 miles. After less than two years, Scott completed his first 100-mile ultra marathon.

"I had a 1,140-day running streak," Scott said. "After the bombings in Boston, I felt that was my next goal. To run Boston, I would have to take 40 minutes off my marathon time, and that's exactly what I did."

Scott went on to add that he has lost 60 pounds since 2011 and ran in the Boston Marathon on April 20 of this year.

"Running has changed my life considerably . . . I am a much healthier and happier person (and) I've met some incredible friends along the way," Scott said. "I've helped others start running as well and (I'm) finding the joy it brings."

The 2014 winners of the inaugural cover search were Scott Spitz of Indianapolis and Christina Lee of San Francisco. Both appeared on the cover of the December 2014 issue of Runner's World.

Spitz adopted the motto "cancer is trying to kill me, but it's going to have to catch me first" after undergoing two major surgeries for a rare abdominal cancer.

Scott has now taken to inspiring others to get off the couch and do the same -- in more ways than one.

"I have become a running coach and I've also helped others accomplish their goals (by) helping them improve their running," Scott said. "I get a joy out of seeing my athletes succeed and improve. It has also brought my family closer together as we all like to run."

If Scott wins the cover (a definite possibility as he leads the contest), he will be the second Indiana native to earn the honor in the magazine's two years of contests.

Thanks to Spitz and Scott, Indiana is may just go two-for-two.