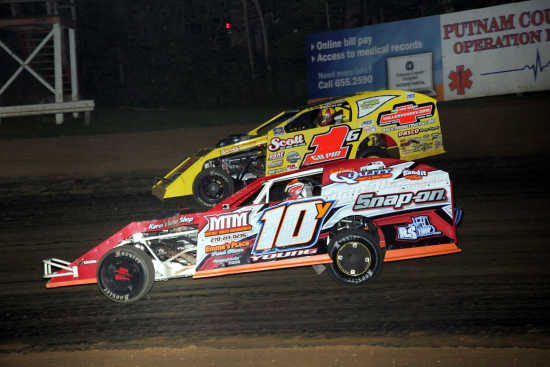 Devin Gilpin (No. 1g) and Trent Young (No. 10) fight for the top spot during the early stages of the Patriot 100 on Saturday night. Gilpin went on to claim the win, his 32nd overall this season. (Banner Graphic/CAREY FOX)

PUTNAMVILLE -- Races are quickly running out for competitors chasing a national championship in the United Midwest Promoters (UMP) points race. So Saturday evening at Lincoln Park Speedway provided an excellent chance for drivers to earn some valuable bonus points with a large car count at the track.

The 12th running of the Patriot 100 for UMP Modifieds took center stage with a $3,000 payday going to the winner. Most importantly for both Devin Gilpin and Tyler Nicely were the 37 cars that were on hand that could reward a victory handsomely on the national scale.

Gilpin had led the national UMP point for much of the summer until Mike Harrison overtook him recently with a barrage of bonus point victories. Well Gilpin took advantage of his opportunity this weekend as he recorded a dominating victory, leading the final three-quarters of the A-main to pick up his 32nd win of the season. With it, he gained valuable points while chasing Harrison to the wire. Gilpin came into Saturday's event trailing Harrison by just 11 points.

Four drivers were also looking to gain some points in the UMP Super Stock rankings and Josh Boller did just that as he picked up the victory ahead of Steve Peeden, Doug McCullough and Kenny Carmichael Sr.

A.J. Smith captured the bomber A-main over Josh Settles and Jordan Almanza and DJ Smiley recorded the second bomber feature win of the evening ahead of Mark Dickerson and Chucky Walden.

Joe Spikers' staff prepared a lightning fast racing surface for the evening as the modifieds took to the track for qualifying to start the evening and to set the heat race lineups.

Young and Carmichael started on the front row ahead of Kramer and Gilpin and that group took advantage of their hard work early in the evening.

Young led the first 11 laps of the feature with Gilpin hot on his heels running the high side around Kramer for the second spot. A lap 12 caution slowed the field, but on the restart, Gilpin made his move alongside Young as the pair battled door-to-door for several laps. However, Gilpin made his pass stick and it was off to the races from there.

As the laps ticked off, Gilpin built upon his lead to the point that he was a full straightaway ahead of second-place running Young. In fact, Gilpin had lapped up to the 12th spot at that point when the caution flew signaling the halfway point of the race. The field pulled to the work area as drivers and crews were able to make changes to their cars for the final 50 lap dash for the cash.

For Gilpin however, there was minimal work done as his tire decisions were spot on. While the rest of the field tried to figure out how to make a run, Gilpin's crew stuck with their combination for the long haul.

It paid off perfectly.

Gilpin wired the field the remainder of the way as the final 39 laps went caution-free and Gilpin worked the lapped traffic both high and low to secure his second Patriot 100 victory. Young would remain in second after holding off Kramer and Jesse Cramer as Tyler Nicely battled his way back to a fifth place finish after having to go to the tail after an early caution.

Boller made the most of a front row starting spot, jumping to the lead at the start and stayed there despite the challenges of Peeden. He would make a last lap Hail Mary attempt at a pass, but Boller stayed in the top spot to pick up the victory as McCullough, Carmichael Sr. and C.J. Bryan completed the top-five.

Smith and Settles ran 1-2 for all but the first lap of the first bomber feature and much like the super stock A-main, the runner-up was unable to make a pass for the lead. Smith got past Kyle Krupa III and didn't look back in recording another feature victory. Almanza took third ahead of Tim Wright and Curt Leonard.

The final feature of the night went to Smiley, who picked up his first feature victory. He would build a solid lead over Dickerson before a caution with three laps remaining opened the door slightly. On the re-start however, Smiley got a good jump and held on to gain the victory.

This weekend will feature the King of Non-wing for sprint cars with $2,000-to-win and all sprints run a feature. Modifieds, super stocks and bombers are also on the docket for Saturday.