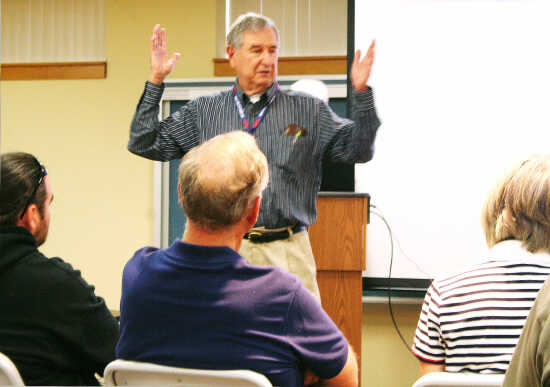 The truth may be out there all right ... it just failed to rear its head Saturday afternoon at the Putnam County Public Library.

That's when representatives of the Indiana chapter of the Mutual UFO Network (MUFON) shared their investigative strategies and stories from some of those who believe they have experienced UFO sightings and related activity.

About 200 reports are investigated annually in Indiana, noted Stewart Hill, director of the state MUFON chapter. And at least a half-dozen new cases were generated Saturday from interaction with some 50 audience members at PCPL. 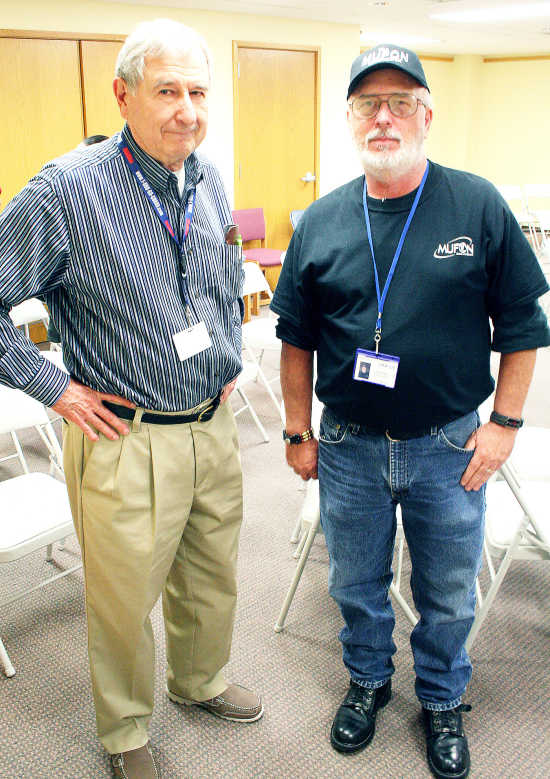 Some are simple sightings of something unexplained in the sky. Others are experiences of missing blocks of time. And some go to the extreme of claiming alien abduction or interaction.

An investigator for MUFON, Phil Leech, also serves as an Indiana state section director. Saturday afternoon, however, he told his own personal story publicly for the first time.

In two separate incidents in Grant County, occurring a few years apart, Leech was returning home from work on the late shift when his vehicle, which had been in perfect operating condition, suddenly died. In both cases, the next thing Leech remembered was standing next to his vehicle, which was then running fine.

"I'm telling you a story I've not told a whole lot of people before," the 55-year-old Leech said, noting that for "many, many years" he spoke not at all about the experiences.

Leech, who calls himself "pretty straight-forward," has served as a 911 dispatcher, first-responder and arson investigator among other official responsibilities, said during the first incident in the 1980s, his prized 1973 Pontiac LeMans "just up and died, no lights, no motor, no nothing."

When he subsequently found himself standing next to the car at the side of the road, Leech realized he had inexplicably lost 18 minutes of time. He said he realized how much time had elapsed because when he got off work, he always made it home in time for the start of the old "Arsenio Hall Show" on late-night TV. That night, the show was well into its hour timeframe by the time he arrived.

To this day, he does not know what happened. He doesn't claim to have seen a UFO or "any little green ETs."

Then it happened again in 1995 as Leech again left a different factory job south of Marion in an old pickup truck that was frosted over after being parked in the lot all night. Leech said he cleared only a small spot on the windshield since he wasn't far from home and he knew there would be little traffic at that hour.

Again he said the vehicle inexplicably died, and when he found himself standing beside it with the truck running, the frost had completely melted from the windshield and it "was about 120 degrees inside that old truck."

"And trust me," Leech added, "that old truck didn't ever warm up on the way home at night."

His goal in all of this, Leech said, is to better understand what happened to him.

He contacted MUFON about the experience, and under regression therapy, he remembered encountering a "very bright light that was very irritating to me."

Leech said he basically has lost some of his memory due to the strange incidents.

"I don't remember my childhood," he told the group. "I can't tell you anything about school, like who my teachers were. I don't remember vacations or what I liked to eat.

"Whatever 'they' are," he suggested, "they did a memory block on me that went a little deep, so I don't remember high school or vacations."

Leech has been tested for strokes and other medical issues that might have affected that block of memory but nothing appears to have triggered it, he said.

To this day, Leech says when he drives down that road "maybe going to a garage sale or something, I don't feel anything -- which bothers me."

Leech said about 70 percent of the Indiana cases he's investigated for MUFON have yielded no explanation.

Estimating that about one person in 100 actually makes a report after their experience, Leech said "some cases start out as a light in the sky and end up a big deal."

No one in the audience was apparently willing to share his or her story in front of the whole group so they broke into one-on-one huddles with the MUFON folks at the end of the program.

One middle-aged local man confided that he and his wife also have endured a "missing time" experience, while a woman from a neighboring county shared a much more involved story with an investigator and recounted a few details of the 1992 incident for the Banner Graphic on her way out of the library.

Calling her family "very much 'we've got to see it to believe it people,'" she calmly related how in a cornfield alongside the road she and her adult daughter "saw a craft as plain as that blue car right there," nodding toward a vehicle in the PCPL parking lot.

Since encountering that apparent landing -- which she says left behind proof when it charred corn stubble in the field -- she claims she has had "continued visitations" at her home from alien beings, something she was unable to even share with her adult son until about four years ago. Meanwhile, she did share an eerie photo taken with her cellphone that seemed to show some kind of presence in the foreground of an otherwise routine landscape shot.

So, yes, perhaps as "The X Files" always suggested, the truth is out there ... When, where and how it might materialize? That remains the mystery.