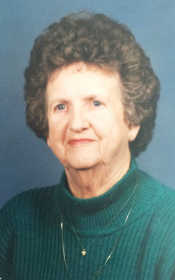 Born June 2, 1921 in Grant County, Wis., she was the daughter of Michael and Alta (Culver) McMahon and was a graduate of Prairie du Chien High School in Prairie du Chien, Wis. She married Hobart Buchanan on June 17, 1939.

Marjorie had owned and operated Buchanan Auto Marina with her husband. She had also worked at the Angwell Curtain Factory. She was a member of the Fillmore United Methodist Church, Cloverdale Eastern Star and served on the Cloverdale Trustee Board.

She was preceded in death by her parents; husband Hobart; son Rick Buchanan; three sisters; and five brothers.

Eastern Star Memorial services will be at 1 p.m. on Thursday, Dec. 10, 2015 at the Hopkins-Rector Funeral Home, Greencastle, with funeral services to follow. Interment will follow at the Forest Hill Cemetery.

The family will receive friends from 10 a.m. on Thursday until time of services at the funeral home.

Memorial contributions may be made in memory to the Humane Society of Putnam County or the Fillmore United Methodist Church.