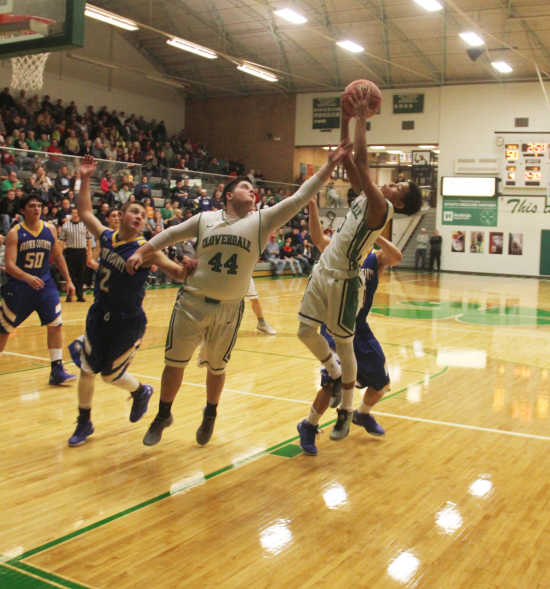 Jalen Moore gets in the air for an offensive rebound against Brown County during the win Friday at home. (Banner Graphic/JAY LOCKETT)

CLOVERDALE -- Brown County was no match for the Cloverdale boys' basketball team Friday and after Cloverdale went up 15-2 early in the first behind Cooper Neese and Jalen Moore's threes, the Eagles never caught back up.

"We're still a young team," CHS coach Patrick Rady Jr. said. "We lost a lot of pieces From last year. This is still an inexperienced group that is learning to play together. When you jump out with a lead like that, you've still got to play with that intensity that you did right from the get-go."

From the get-go, CHS was on fire. Moore nailed two threes after crossing his defender at the top of the key and Neese made three from long-range. The Eagles managed to trap Moore before he passed out to Seth Pfaff who also knocked down a three in the first, adding to the 26-9 opening quarter.

Brown County, who had some three-point shooters, made three from long distance in the first half but couldn't keep up with the Clover scoring.

The Chaos Defense was in full effect as Brown County had a tough time getting many decent looks with the active Clover hands making every pass difficult.

"I was proud of our guys. I thought they played to the scouting report," Rady said. "They guarded extremely well and they finished the plays with rebounding. The first 10 minutes were about as good as we've played defensively all season."

It was no two-person game from Cloverdale, even though he "Clover Splash Brothers" accounted for 77 percent of the scoring. Moore dished seven assists to teammates and when Brown County missed Brenan Hall was in the mix grabbing seven boards on the night, second behind Neese.

"They are really gelling together now," Rady said. "In the last five games, the ball has really moved. The offensive spacing has been good. I think we are making the right the decisions. Defensively we are getting better and better every game."

The Eagles did everything they could to stifle the scoring of CHS and even outscored the home team 15-12 in the second but Brown County never got the game close. The talent level of Cloverdale was too much for the Eagles to handle.

After an even third quarter when both teams scored 15, CHS outscored Brown County 15-9 in the fourth to earn the win.

"If we can continue to get better in every game whether it is in a game on in practice then I think this group could be very special over the next two seasons," Rady said.