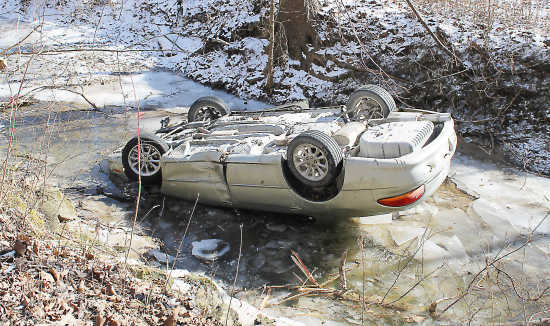 When Greg Whitman, sign technician for the highway department, noticed a sedan overturned in the waters of Little Walnut Creek, he acted quickly and decisively, calling 911 before plunging into the water to pull the woman from her car.

The ordeal meant a trip to an Indianapolis hospital for the driver, 25-year-old Christy Biggs, but apparently no serious injuries.

Shortly after 10 a.m., Biggs was southbound on Parker Stone Quarry Road (525 West) in Madison Township. While rounding a curve approaching the creek, Biggs apparently lost control of her 1999 Chrysler LHS on the icy roadway.

Lt. Donnie Pettit of the Putnam County Sheriff's Department said his investigation revealed that Biggs initially left the road on the west side of the road before she overcorrected, at which point the vehicle spun counterclockwise back across the road.

The car left the roadway on the east side and started down the embankment to the creek. The car caught on a small tree, which caused it to flip over and land on its top in about a foot of water.

As air temperatures hovered below 20 degrees, Biggs was trapped in the car for at least five minutes.

Whitman arrived and called 911 at 10:13 a.m. before jumping into the icy waters.

Finding part of Biggs' head and back in the water, Whitman cut her seat belt and helped her out of the car. Her hands were so cold that she couldn't feel anything, so Whitman let her put them inside his coat.

Whitman then carried her to the shore but was unable to walk up the embankment, so he held her in his arms until her brother-in-law Joe Biggs arrived.

The two men then got the woman up to the road and put her in Joe Biggs' truck until more help was on the scene. 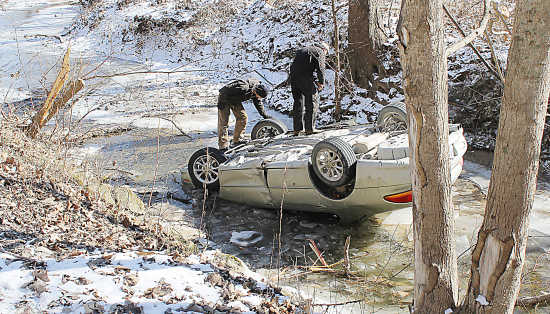 Assessing the damage following a Thursday morning wreck, Ben Biggs and brother Joe attempt to retrieve a car from Little Walnut Creek. Ben's wife Christy was driving the car when it overturned in the creek and was briefly trapped before being rescued by a Putnam County Highway Department employee.

Pettit arrived on the scene to find Biggs soaking wet and extremely cold, but conscious. She also complained of right hand and wrist pain.

Putnam County Operation Life transported her to Methodist Hospital in Indianapolis for further evaluation and treatment.

Her husband Ben and brother-in-law Joe were working late Tuesday morning to retrieve the car from the creek.

In retelling the story of Whitman's brave act, County Highway Supervisor Mike Ricketts expressed great pride in Whitman's rapid response and willingness to put himself at risk to help someone else.

"I have worked alongside Greg for many years and I want to say that I am proud of him," Rickett said. "He is a caring person that would go above and beyond to help anyone in need."

For his part, Lt. Pettit said Whitman may have saved Biggs from a much worse fate, given the remoteness of the road.

"If it wasn't for him, it probably would have been a lot worse because nobody travels down that road," Pettit said.