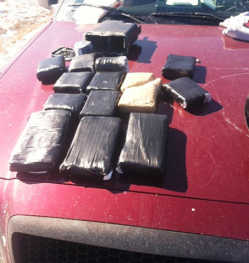 LITTLE POINT -- A traffic stop on Interstate 70 Thursday morning revealed a large amount of drugs and landed an Arizona man in the Morgan County Jail.

At 11:43 a.m., Indiana State Troopers from the ISP Drug Enforcement Section stopped a 2008 Ford passenger car for an improper lane change on eastbound I-70 near the 52-mile marker.

During conversations with the driver, several indicators of possible criminal activity were detected.

A search of the vehicle yielded approximately two pounds of heroin and 20 pounds of cocaine.

The drugs were found throughout the passenger compartment and the trunk area. The street value was estimated at $360,000.