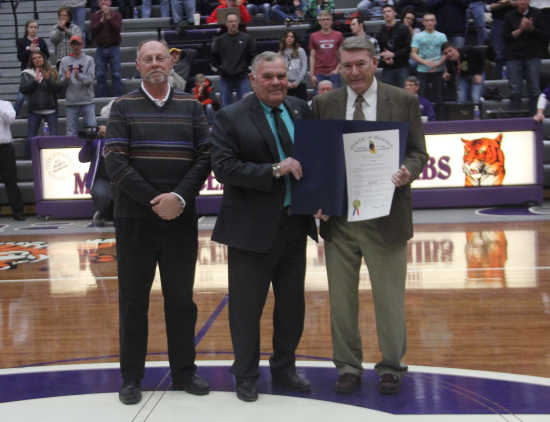 In between games at the Putnam County Tournament Friday former Coverdale and Bainbridge head Coach Pat Rady received yet another honor from the State of Indiana, this time presented by District 44 State Rep. Jim Baird on behalf of Gov. Mike Pence.

Rady was giving the Sagamore of the Wabash award, which is the highest honor a governor can bestow upon a citizen of Indiana. The Indiana delegation during the term of Ralph Gates created the award to honor those who "distinguished service to the state or to the governor."

"Sagamore has to do with the Indian tribes of the northeast," Baird said. "In their language it was someone the chief sought counsel or advice from. So I think coach Rady has done a tremendous job not just with the awards that he's won. But 51 seasons and 761 games; think of how many young people he's influenced. The award is the highest award a governor can give to a citizen of the state and it's to recognize that kind of contribution to our Hoosier State."

Rady who is never one to take credit,thanked his wife Margaret and asked her to join him on the floor saying, "If someone as beautiful as she is can be with my ugly mug, then that's saying something."

The Hall of Fame coach recently was honored at Cloverdale after being named the National Coach of the Year by the National Federation State High School Association.

"The world doesn't need more basketball players," Rady said. "It needs better husbands and better fathers. Looking around at these players that's what they've become. A lot of them have stayed right here in Putnam County and they're good husbands and good fathers. They are the leaders in the community. There's nothing like the Putnam County Tournament. God bless Putnam County basketball."