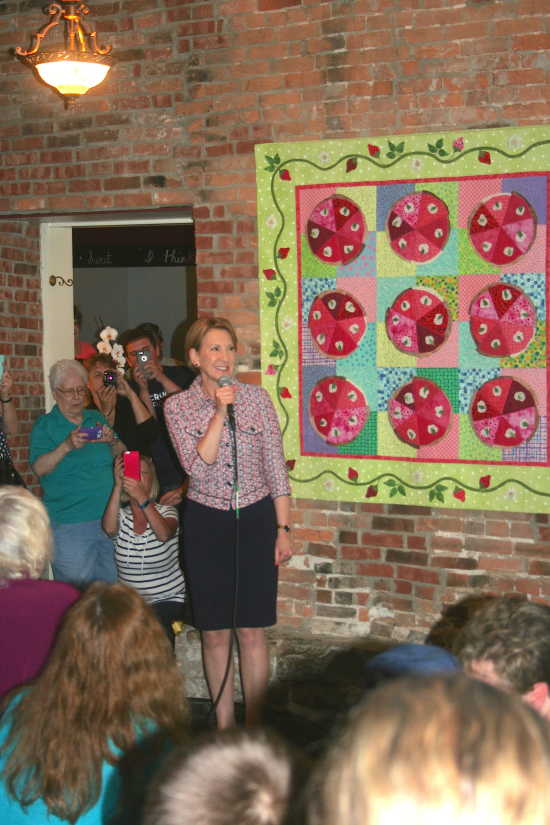 After introductory remarks by Congressman Louie Gohmert (R-Texas) and Sen. Mike Lee (R-Utah), Heidi Cruz spoke to the crowd about what her husband would do as president and who he is as a person.

After her speech, Fiorina took the floor.

"The Hoosier state has a choice to make," she said. "And when you choose the leader of the free world, when you choose someone to represent all of you, you need to choose someone knowing the person from the pattern of their lives, from their friends and their family, not by what they say when they're asking for your vote, but who they really are."

She said that Ted Cruz is a strong man and a "good father whose children both adore and respect him. All of those things tell you so much you need to know about this man."

Fiorina also said that our enemies are an indication of who we are.

"I say that because one of the things that's going to have to happen here, from our commander-in-chief and our next president," Fiorina said, "he's going to have to be willing to make some enemies because that's what it takes to challenge an entrenched system, entrenched interests and crony capitalism.

"I've challenged the status quo all my life, it's how you get from secretary to CEO," she continued. "I know from personal experience that if you're going to push hard on the status quo, you're going to do more than rock the boat or ruffle feathers. You're going to make enemies. I'm frankly proud to know a man who has been willing to pay the price and make an enemy out of John Boehner because that says he's going to fight for you."

She also commented on the recent endorsement of Cruz by Gov. Mike Pence, saying, "It's kind of the tale of two Mikes. We have Mike Tyson, a convicted rapist, who Donald Trump thinks is a tough guy. And you have Gov. Pence endorsing Ted Cruz. That's as clear a choice as you're ever going to get."

She went on to explain why being a Constitutional scholar would make Cruz a good president.

"Power concentrated is power abused. The Constitution not just enshrines our rights and liberties, it prevents, it restrains against the concentration and the abuse of power. And what ails us, folks, and you know this, is we have had too much power concentrated for too long in the hands of too few. So we better have a fearless fighter in the Oval Office who understands his job is to push the power out of Washington, D.C., to challenge that and restore power and opportunity and money and possibilities back to the citizens' hands, communities and states."

She also addressed the idea that Trump will "challenge the system."

"Donald Trump will not challenge the system because he is the system," Fiorina said. "He is a crony capitalist. He's going to protect the system like he's done all his life and use it to enrich himself."

She ended her speech by saying, "We are counting on you to make the right choice because, truly, the soul of our party and the future of our nation hangs in the balance. I cannot think of a better set of people to rest our trust in."

After her speech, the crowd quickly lined up to take pictures and get autographs.

Randy and Sharon Esco, of Alabama, had driven 11 hours to work as phone operators in Indianapolis for the Cruz campaign and took a break by coming to Almost Home.

"I think she will be an excellent vice president," Sharon said. "I think Cruz made the right choice. She has the same values as him. I wouldn't vote for her just because she's a woman, but it's nice that the right candidate happens to be a woman."

Others were not so convinced, but still impressed. Molly McGuire, a political science major at DePauw University and Bernie Sanders supporter, said "I thought she was unfortunately eloquent. There are two versions of anti-establishment rhetoric."

Fiorina had also been greeted by protestors outside the establishment, holding signs that read, "Jesus was a refugee." Alex Tarr, another DePauw student and Sanders supporter, recounted that one of the protestors had shouted that Fiorina would be the next Margaret Thatcher, to which Tarr said Fiorina responded with a loud thank you.

"She is charming and terrifying," Tarr said. "I think I would like her more than whoever Trump picks."

Earlier, Tarr had asked Fiorina to sign his book, "Reminisces of the Cuban Revolutionary War" by Che Guevara. Inside, Fiorina had signed her name, but also written "This guy crushes human potential."

"She is very positive and very down-to-earth," Russell Harvey, Greencastle, said, "but still very serious. If I were to use one word, I'd say approachable. She's not a career politician. She is business savvy and not afraid to face challenges."