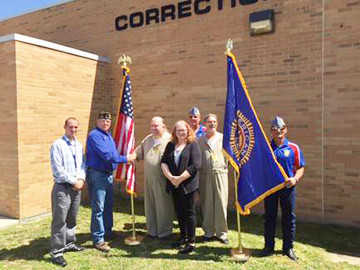 The Putnamville post was presented with an American flag and American Legion flag, along with stands, for their meetings and other ceremonies.

PCF Correctional Officer Tony Sparks, who was instrumental in the recent formation of the PCF Legion post, is commander of the Sons of the American Legion at Greencastle.

"We're a new post, and this donation is extremely meaningful to us," PCF post liaison and Chaplain Jacinda Cronau said following the presentation. "We are looking forward to a long and positive relationship with the Greencastle post."