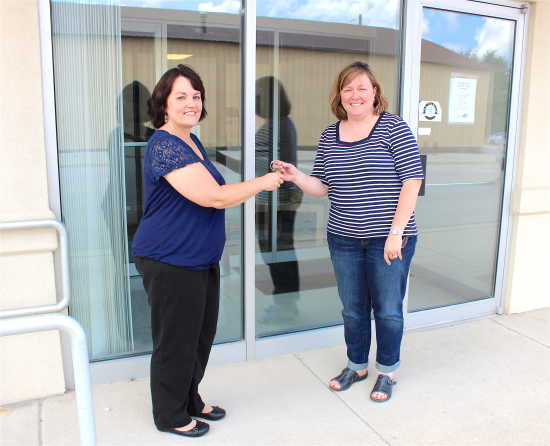 ROACHDALE -- TDS Telecom, a telecommunications company that has served west-central Indiana and other areas of the Midwest since 1969, has decided to donate its former regional headquarters in Roachdale to the community after downsizing to a much smaller building across town on North Meridian Street.

The center, which consists of large, spacious rooms as well as a separate area with ample square-footage for offices, is to become Roachdale's new community center and office building, located at 204 N. Indiana St.

Roachdale Clerk-Treasurer Debbie Sillery, as well as TDS Senior Accountant and Roachdale native Jacquelyn Simpson, were present Monday for the ceremonial "passing of the keys."

Each said she is excited to see what comes next for the center.

"We really haven't had anywhere in our town for community events until now," Sillery said. "It's very generous of TDS to give us the building -- it even has quite a bit of stuff coming with it like shelving and furniture."

Cubicles containing a myriad of desks, tables and chairs are still held within the upcoming community center. These also are being donated by TDS Telecom. (Banner Graphic/NICK WILSON)
Order this photo

"Up until now you've had to go to the school or possibly the meeting hall," Simpson added. "Now it will be really easy to host events."

Furthermore, Sillery said that despite coming fully-furnished and "fully-wired" (as would be expected of a telecommunications company, it was light heartedly noted), potential grant money will help the cause considerably as the building will require some minor updates such as lighting and general interior alterations.

"Our plan is to go after a large OCRA grant," Sillery said. "And we've already started talking to some people to get that started. Our plan is for (the southern end of the building) to be used as a community center and for (the north end) to be used for offices."

The building, which was still in use by TDS through Aug. 5, was thoroughly disinfected and cleaned by a cleaning service before the company and its employees officially exited the facility.

A large parking lot extending to the south and west of the facility, a wheelchair ramp, lobbies, a kitchen and a waiting room are hoped to ease the acts of bill paying and other interactive services for residents of the town, as well. 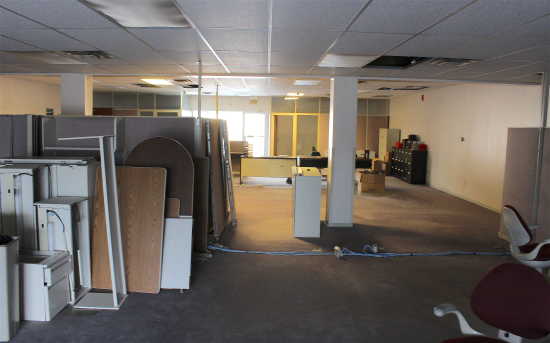 The large, main area of the upcoming community center has many different options for the town. (Banner Graphic/NICK WILSON)
Order this photo

For more information about the upcoming community center, persons may call Roachdale's current town office at 522-1532.