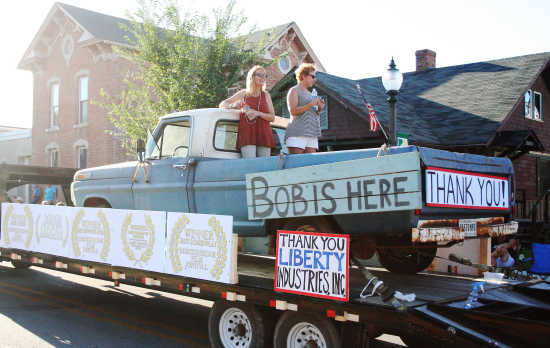 Ol' Blue, the 1971 Ford F-100 pickup truck with its three-on-the-tree manual transmission was the property of Kyle Ham's father and grandfather before he drove it to school and town while growing up in Oklahoma. It serves as a key prop in the film and made an appearance in the 2016 Putnam County Fair Parade as the filmmakers thanked local residents for their assistance in filming the move locally. (Banner Graphic/ERIC BERNSEE)

"Reparation," a multi-award-winning independent film shot in Putnam County during the summer of 2014, will launch its national release with a premiere Sunday, Sept. 4 in Greencastle.

The premiere at Ashley Square Cinemas is scheduled to begin at 7 p.m.

The Ashley Square run will continue with 7 p.m. showings Monday-Thursday, Sept. 5-8 at the theater on the northeast corner of Seminary and Indiana streets.

Tickets are $10 for opening night and $6 for the remainder of the run. Advance tickets are on sale at Ashley Square or at www.reparationmovie.com.

"As of last Friday, 120 tickets had been sold so I suggest purchasing them soon if you want to attend the opening," notes screenwriter Steve Timm, DePauw University professor of theater and communication who collaborated with former student Kyle Ham (a 1994 DPU grad) on the story that evolved into "Reparation."

An 11-time award-winning independent thriller filmed in and around Greencastle and parts of Putnam County, "Reparation" is described as a powerful psychological thriller that swirls around the character Bob Stevens (played by Marc Menchaca of "Homeland" fame). 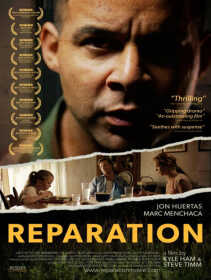 The official "Reparation" film poster as the movie prepares for its national release with a premiere showing Sunday in Greencastle.

A small-town vegetable farmer who has lost three years of his memory, Stevens finds his peaceful existence beginning to unravel when Jerome, a mysterious stranger (portrayed by Jon Huertas, a regular on the TV show "Castle") arrives claiming to be his best friend from their time together in the Air Force.

This spring at the 2016 Indy Film Festival, "Reparation" captured the American Spectrum Award -- the first time a Hoosier film has won that category in festival history.

That marked the film's 11th win in just nine competitive appearances -- an improbable run that includes Audience Awards at both the Austin and Sedona film festivals, the overall Best Film prize at Santa Fe, two Best Narrative Feature awards (at the Julien Dubuque and River's Edge International film festivals), as well as a near sweep of the Breckenridge Film Festival's acting and screenplay honors.

"Kyle and I were able to shoot this film here (in Putnam County)," Timm praised, "because of the tremendous support we received from the community and DePauw University. I hope you'll see the film on the big screen -- although I'm fine with you renting or purchasing it on iTunes, Amazon and/or Vimeo or on DVD/BlueRay after Nov. 1 -- just in time for the holiday season."

The MPAA has not rated the film, although Timm said he is "pretty sure it will get an R rating."

In conjunction with the film's Greencastle release, two other public events are scheduled locally.

Actress Virginia Newcomb will speak Monday, Sept. 5 at 4 p.m. in the Kerr Theatre of the Green Center for Performing Arts. Newcomb, who portrays the fearless and independent spirit Lucy in the movie, will speak about acting professionally.

A performer, singer, filmmaker and visual artist, Newcomb has an acting resume that spans media from indie features ("Reparation," "Union") to working alongside talents like Cillian Murphy and Steve Carell.

She made her Broadway debut in Jay Scheib's live cinema production of "Platonov" or "The Disinherited," which was live streamed to Time Square and BAM. Her first self-produced film is the award-winning "Three Fingers," about a young female Marine war veteran.

Newcomb and Timm will also appear at the Putnam County Library on Tuesday, Sept. 6 as part of the PCPL noon Brown Bag Lunch series where they will field whatever questions the public may have about the film.