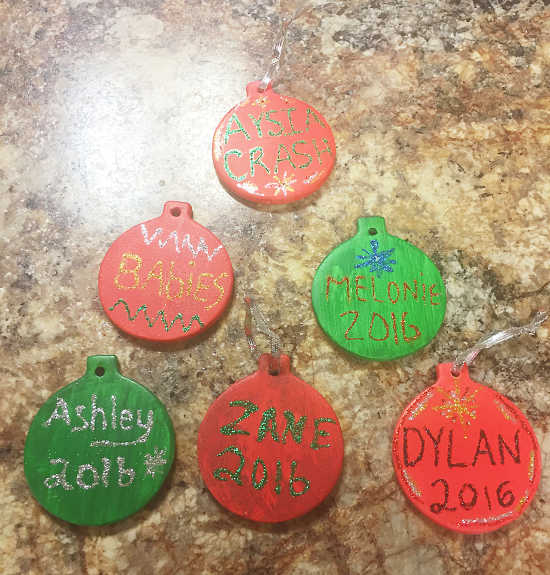 With Christmas approaching, inmates in the parenting class at Putnam County Jail were recently asked to make ornaments for their children. One inmate worried that his child might not like his creation, but another quickly corrected him. “Of course they’ll like them. We never did anything like this for them when we weren’t in here.”
Banner Graphic/JARED JERNAGAN

A couple of days before Thanksgiving, a remarkable story came together among the inmates at the Putnam County Jail.

A pair of inmate workers overheard a conversation a fellow inmate was having with his wife.

With the breadwinner behind bars, the family was struggling. The kids had shoes, but they were adult hand-me-downs that didn’t come close to fitting. The other inmate’s wife was getting the kids fed, but often going to be with her own stomach empty.

That’s when the other two inmates put their heads together to come up with a solution.

They first told the problem to jail staffers, who in turn reached out to resources in the community to see if something could be done.

By day’s end, a pair of jail officers were delivering food, shoes and other needed goods to the family, and all because a pair of inmates with problems of their own were thinking about others.

Perhaps the best part was that the two inmates who started it all were given the privilege of sitting in the back seat of the car as the goods were delivered.

“I don’t think there was a dry eye in that vehicle on the way back,” Jail Capt. Shelody Birkemeier said. “Those two were the catalysts.”

The two men shared their story with a dozen or so other inmates that evening in a session of their Moral Reconation Therapy (MRT) class at the jail.

MRT is one of several classes implemented at the jail since Jail Commander Steve Hibler assumed his position in May.

The men shared with their classmates because they believe, as do class facilitators Capt. Berkemeier and Sgt. Jeremiah Jackson, that what they’ve learned in the class had a direct impact on their behavior that day.

“My morals have been f***ed up for years,” one of the men told his classmates. “But today, we found that we have some good morals.”

“You guys should’ve seen the eyes in those little boys’ faces,” his partner chimed in.

Those morals are excactly what MRT and the other classes at the jail are aimed at changing.

“When I came on board, the sheriff wanted some initiatives back in the jail,” Hibler said.

Those initiatives come in the form of the new classes at the jail — MRT, batterer’s intervention, anger management, parenting and My Steps, a course Hibler created himself.

For inmates wanting to better themselves, My Steps is the first step, acting as a sort of screening process for the other classes.

For Hibler, this is as simple as returning classwork. The only cost sunk into My Steps is sheets of copy paper. If a student can’t be trusted to return a simple sheet of copy paper, the jail staff is unwilling to invest in a textbook for him or her.

My Steps is a four-part class. The first three sessions involve motivational videos devoted to coming up with a plan for life improvement.

In the fourth session, Berkemeier and Jackson come in to assign them to one of the more advanced classes.

Between 110 and 120 inmates have run through the My Steps program, with many moving on to one of the other classes.

The idea is for inmates not to spend their time passively, instead finding a way to improve their lives upon release.

“They talk about, ‘sleeping their time away,’” Hibler said.

A 28-year veteran of the Indiana State Police, Hibler is also a National Guard veteran, spending time as the chief of staff of a large military prison camp in Iraq. He said that some of their greatest gains were in educating young Iraqi prisoners. He hoped to bring such success to the jail.

“What it does is get them real active while they’re here and get them prepared to make some positive changes,” Hibler said.

While My Steps comes at minimal cost, the other classes have training and supplies costs attached. These are funded through a $30,000 federal grant applied for through Putnam County Community Corrections.

“I think it’s wonderful,” France said. “I applaud the efforts that the jail is going through to make some cognitive changes before people get out. I applaud Steve Hibler and Sheriff (Scott) Stockton for their efforts.”

With Community Corrections clients more free to come and go than inmates, there are some challenges, but Hardwick said he has seen some success stories.

Back at the jail, the inmates who have gone through the programs have certainly become believers.

Each part of the 12-step MRT program asks participants to take critical looks at their lives, the choices they’ve made and what they can do to change it.

After the inmates share, one of three facilitators — Berkemeier, Jackson or Matron Asley Lytle in the women’s class — takes a positive yet critical look at the answers.

For some of the steps of the program, other inmates who’ve completed that step get to vote on whether their classmate gets to move on.

It’s a way of getting the inmates to take ownership of the class and their own lives.

During class, the positive comments from the inmates pour out.

“I wish I could’ve had this program back when I caught my first charge,” one man said.

Another inmate, his conscience getting the better of him, made an unprompted confession to the group about a recent session at which he felt he had not fully met the requirements of the step.

“I felt like I wasn’t being honest with the group,” he said.

Similar thoughts are emerging from the parenting class as well. During a recent session, the inmates were asked to make ornaments for their children.

“One of the guys said, “What if they don’t like them?’” Berkemeier shared. “Then one of the others said, ‘Of course they’ll like them. We never did anything like this for them when we weren’t in here.’

“I didn’t know what to expect, but it was great,” Berkemeier said of the ornaments.

Thus far, things have changed for the better inside the jail. Conditions are cleaner. There is no longer a block devoted to discipline problems. Morale is up for staff and inmates.

The hope is that the men and women emerge from incarceration like one man who spent his last evening in Putnam County Jail at an MRT class.

He talked about how his attitude had changed since being assigned to the MRT class even though his preference was for anger management.

The man went on to share his desire to find an MRT class to continue the program once he was on the outside.

Berkemeier then encouraged him to reach out to the jail staff if he struggles.

“Call up the jail when we’re here and we’ll go over it,” she said.

For fellow facilitator Jackson, his belief in the MRT program prompted a change in the direction of his career. A former jail officer, he left his position for an opportunity with Community Corrections. Having been exposed to MRT through his new job, Jackson decided to return to the jail when the program was implemented there.

“It was part of the reason I came back here,” Jackson said. “It’s that much of a game changer.”

Sitting in the classes twice a week, Jackson doesn’t regret his decision.

“Sometimes I sit here and it gets so positive, I get goosebumps,” he said. “It blows my mind, almost every time we’re here, to see you guys progress.”