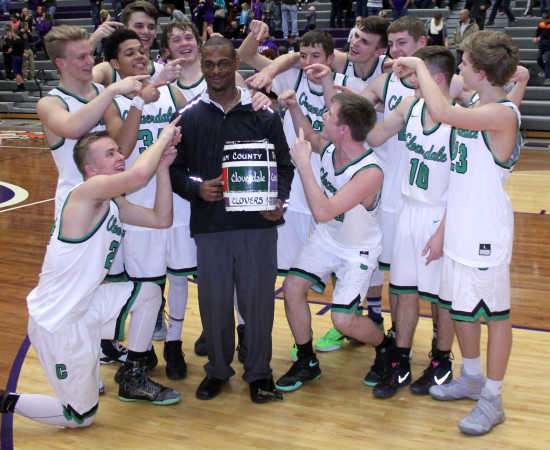 Cloverdale assistant coach Karl Turk has been quickly accepted by the team members and students at the school.
Banner Graphic/Joey Bennett

Turk was hired as an assistant coach at the Texas A&M-Corpus Christi in 2006, and the following year he helped the team to a rare berth in the NCAA tournament.

Turk left TCC for West Oso High School in Corpus Christi, and was an assistant coach there when the school won a state championship in 2011.

The Indianapolis Arlington grad became coach at West Oso three years ago, and the Bears compiled a 50-10 record in Turk’s two seasons — which included qualifying for the Region IV-4A tournament in 2015-16.

Turk was named the All-South Texas Boys Basketball Coach of the Year after the 2014-15 season.

Yet, despite all that success, Turk could have borrowed a lyric from the famous song “Back Home Again in Indiana” because he definitely “longed for his Indiana home.”

Turk resigned at West Oso last June, and returned to the Hoosier state at Cloverdale as the school’s Jobs for America’s Graduates coordinator and assistant boys’ basketball coach.

“It was time,” Turk said this week. “It’s such a blessing that I am able to be back here. I had 10 very prosperous years in Texas, and for all the basketball years there were a lot of changes taking place back here.”

Turk had lost a grandmother and gained a niece, and said he had missed too many birthday and graduation parties.

“It’s been a tremendous family reunion in many ways,” he said.

Coach Patrick Rady and his family are Turk’s connection to Cloverdale, and a big part in his relocation to the Putnam County school.

“The ‘Rady Bunch’ [including big coach Pat, Patrick, his wife Jonna and their daughter Hannah] is the reason I’m at Cloverdale,” he said. “Coach Rady gave me my first introduction into coaching at Terre Haute South in 2002.”

Turk recalls he had worked as a manager at Indiana State under Royce Waltman, and Waltman contacted Rady to see if he had room on his staff for Turk as an assistant.

“I called him, and for a long time he didn’t call me back,” Turk said of the Hall of Fame coach who preceded his son at Cloverdale. “I was persistent and I finally went down there to talk to him about it.

“I found out that was a screen he used to test people to see how much they wanted something. I passed.”

Turk originally learned basketball through his grandfather, who was a big fan of former Indiana coach Bob Knight.

Turk learned phrases such as “cutting” and “screening” from talking with his grandfather about coach Knight.

Not one of the taller kids in his grade, Turk still wanted to be a player. Things changed drastically one night when he was 14 years old, though.

He was a big fan of the Indiana Pacers, and was watching on television when the team lost a playoff game to Chicago.

Two hours after the game, Turk fell out of his bed. His mother thought he was having a stroke.

What he had developed was a condition called transverse myelitis, a spinal cord problem which prevents signals from being communicated between the brain and the lower extremities.

“They don’t know what caused it,” Turk said. “I’ve had a litany of blood tests and screens and nothing has been able to help figure out why.”

So, for the last 23 years Turk has walked as well as can be expected with the use of a cane. His legs don’t always get the message on when his brain wants them to move, but he manages.

Turk’s glass is definitely half full, not half empty, and he feels the Lord wanted him to have the disease — so he’s made the best of it.

“It got me a head start on coaching,” he said, noting he was a team manager for four years at Arlington when he could no longer play and got an early introduction into paying attention to the job of the coach. “I am an extremely introverted person, but having this ailment has forced me to open up to other people. It has forced me to take chances.”

Turk finds he can use the situation to his advantage while coaching, with the obvious benefactors being the players on the court.

“Any coach can yell at you and tell you what to do or not do,” he said. “It’s a little bit different when the guy with the cane tells you to run, then he gives you that second looks that tells you he wishes he could run.

“When as a player you say you’re tired and your legs hurt, and he’s giving you that look like ‘my legs hurt every day’ it kind of shapes the message,” Turk added. “I use that in my tool belt of coaching tactics.”

Patrick Rady was an assistant coach at Terre Haute South under his father, and took Turk with him to Southwestern (Hanover) for his first head coaching position.

Rady noted that Turk has been a mentor to Hannah, he and Jonna’s only child, and jumped at the chance to bring him back to his home state.

“Karl is great with kids, and he’s a part of my family,” he said. “The kids, whether our players or students, just love him. It’s how he makes them feel, and he makes you feel special. He gets to know the kids by names, and goes to their sporting events.”

Rady said that the combination of the special nature of Cloverdale’s team this year, plus Turk’s desire to return home, were a perfect match.

“He’s a basketball junkie,” he said. “He’s a great motivator, and does an outstanding job of scouting and preparing. He spends a lot of time on it, and that comes from his time with Royce Waltman and [assistant] Dick Bender.

“He sees things very well that other people don’t see,” Rady added. “He has the total respect of the kids.”

Like other people afflicted with such medical issues, Turk has taken it upon himself to make people aware of the disease — and now serves as a conduit between how he has dealt with TM and someone else who got the disease.

Turk recently met a girl in California who saw a special segment on CBS Sports about him two years ago, and the two have communicated about their rare but similar problems.

The girl is a champion surfer, and Turk plans to go visit her later this year to see how she manages and to help her with anything else he can’t do via long distances.

“She was unsure what was going to happen, and she and her dad reached out to me,” he said. “One thing which had never happened was meeting someone who has the same thing as me. This gives me the strength to keep fighting.”

Turk has found a home at Cloverdale, although it may not always be in his current job. He taught Spanish in Texas, and has also earned his administrator license while working on his Ph.D.

Turk is one of few 37-year-old, African-American bachelors in the Cloverdale community, but has been widely accepted by the student population despite his many differences.

“He’s brought a lot of energy on both ends of the court,” Cloverdale junior Jalen Moore said. “He’s a really caring guy, and he talks us through bad times and gets our heads straight, and it’s not all about basketball.”

Senior Cooper Neese commends Turk for his coaching ability, but says his contribution is not limited to that aspect.

“We’ve been extremely blessed to get a coach like him to come to Cloverdale to go along with our other coaches,” he said. “He could be a head coach at a lot of other places. He loves this town, and loves the people here.

“We are happy he’s here, and hope he can stay around for a while,” Neese added. “He’s one of the best basketball minds I’ve ever been around, but he’s an even better man.”

Neese said that Turk’s disability does not limit him in any way, and that some students take it as motivation.

“You see him working out and working out on the bicycle [about 18 miles a day], lifting weights and doing everything we do,” he said. “His disability does not stop him at all.”

Neese thinks one of Turk’s best qualities is his ability to interact with the players on their level, and to serve as a comforter when criticism from other coaches is necessary.

“He’s definitely the ‘good cop’ when we are getting yelled at,” Neese said. “Basketball means so much to him, and I think he’s one big reason why we have gotten so much better this year.”

The same goes for anyone who’s been around him — he has made them better as well.

ADDITIONAL LINKS
Comments
View 1 comment
Note: The nature of the Internet makes it impractical for our staff to review every comment. Please note that those who post comments on this website may do so using a screen name, which may or may not reflect a website user's actual name. Readers should be careful not to assign comments to real people who may have names similar to screen names. Refrain from obscenity in your comments, and to keep discussions civil, don't say anything in a way your grandmother would be ashamed to read.
Respond to this story