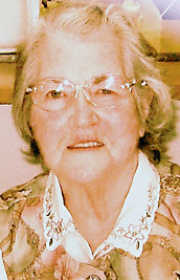 She was born Nov. 6, 1931 to Floyd Wesley and Genevieve (Hamilton) Phelps.

She worked at PR Mallory in Greencastle for 15 years, then later became a homemaker to her family.

In addition to her parents she was preceded in death by her loving husband, Finis, and brothers George and Joseph Phelps, and sister Juanita Owen.

Funeral services will be conducted at 1 p.m. Tuesday, March 21 at Hopkins-Rector Funeral Home, Greencastle, where the family will receive friends two hours prior to the time of the funeral. Burial will follow in Clinton Falls Cemetery.

Arrangements have been entrusted to Hopkins-Rector Funeral Home, and thoughts and condolences may be shared with the family by visiting www.Hopkins-Rector.com.