Elementary teacher gets the energy out 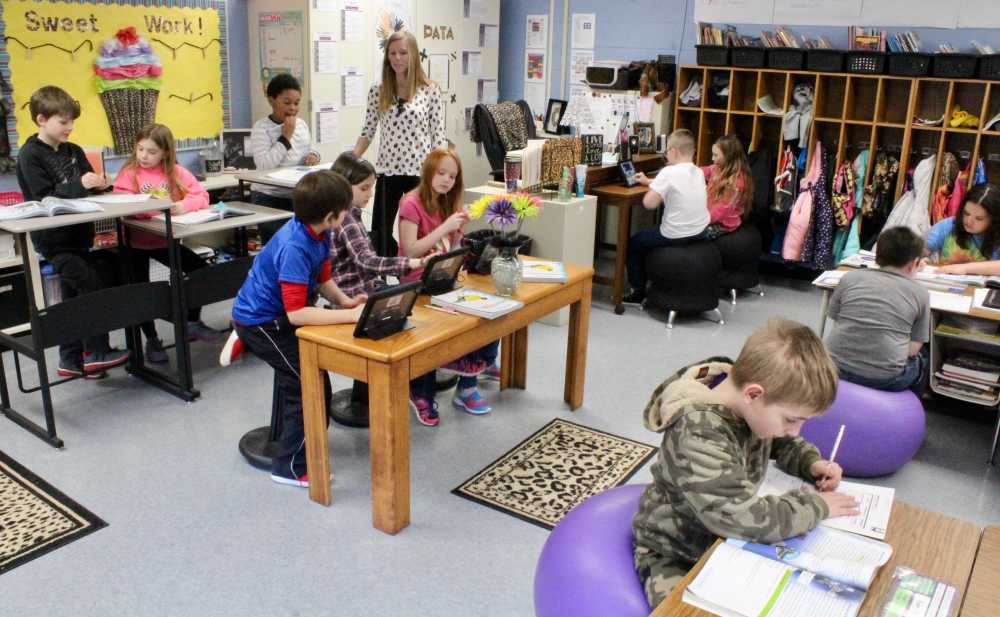 Banner Graphic/NICK WILSON The third-grade classroom at Tzouanakis Intermediate has been retrofitted three times with different types of “flex seating” by teacher Carmen Cross (above, polka dot) through the use of generous donations. This includes standing desks, wobbling chairs, stability balls and “zenergy” seats, as displayed by students Quinton Seaver and Gracelynn Pilkin-Little (below).

In just her fourth year as third-grade teacher at Tzouanakis Intermediate, educator Carmen Cross has already made strides concerning her students’ energy levels.

Through the use of programs like Donors Choose, Cross has seen three grants come across her desk, each of which have fully funded her goals of letting students release some steam through physical activity in the classroom.

Donors Choose, which Cross said is similar to a Go Fund Me account, can be found on Amazon and has given her the unique ability to replace her desks and chairs with other devices that allow students to remain physically active, even while stationary. 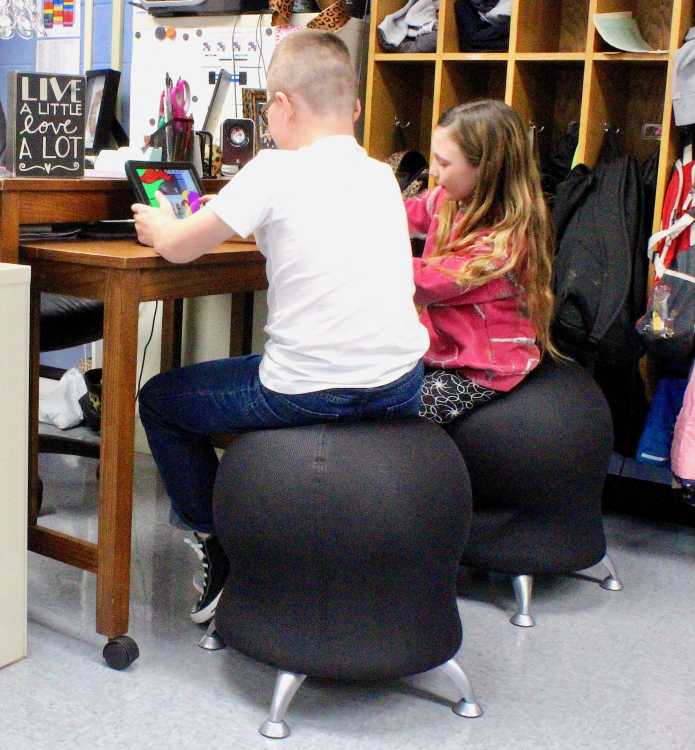 “In what was my second year at Tzouanakis, I did my first ‘wish’ for the stability balls,” Cross said. “The chairs just aren’t feasible for kids -- we have active, life-long learners and it’s just not appropriate for them to sit in a chair all day.

“That project cost the couple-thousand dollars which I had raised on the website,” Cross continued, moving on to explain how Donors Choose operates. “Basically, you write up this ‘wish’ and when it’s approved, it goes up on their page -- Facebook is my main source where I share my projects -- and then people get on and donate however much they like. I’ve had family members, people from out of the state and places like Duke Energy donate. Once you’ve raised the money, your project is funded and Donors Choose sends the items.”

Cross went on to say some of her obligations laid out by the program are to follow up the project with a “letter of impact” -- what effect the items have had in the classroom -- along with thank-you letters to donors, written by the students.

“This year I did two projects,” Cross said. “The first semester, I (acquired) the standing desks at about $500 apiece -- I actually had a student push me to do this, he was my inspiration for the idea.

“Then, at the end of that project ... I received a gift certificate for $200 by Donors Choose for future projects,” Cross continued. “So I kind of had a nudge under me to do another project. I had been doing all this research about the benefits of flex seating -- how it improves your students’ focus, how it allows them to choose how they learn best -- because, as you know, we live in a world of differentiated learners.”

Studies have shown that fidgeting and extra movement in the classroom have allowed students’ processing tools to function at a higher level, especially for students with ADHD, ADD or other neurological issues, Cross said.

“Whether it’s the standing desks and the movement of their feet, or the wobble stools and being able to move,” Cross said, “anything like that has shown to increase processing skills. Myself, I was diagnosed with ADD during my sophomore year in high school, so I can relate. If I can’t sit here and work for 40 minutes then I can’t expect them to do that either.”

Cross has sent letters home with students when progressing through her projects, the latest of which reads, in part: “Using these items, students will have the opportunity for movement, which will help increase blood flow and force muscle engagement. Increased blood flow has been shown to increase attentiveness so students who have previously struggled with focus may be better equipped to learn.”

As Cross moves forward with her teaching career and classroom, she looks ahead to a day where she may not have a single traditional desk in her classroom, which has become the envy of the Tzouanakis student body.