If things seem a little brighter these days at Greencastle City Hall, it's because ... well, they literally are. 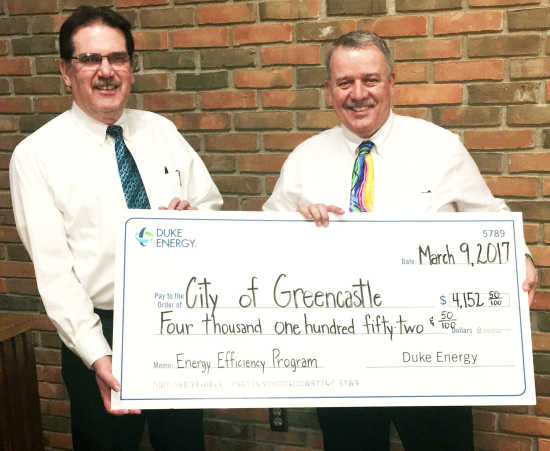 Duke Energy Government and Community Relations Manager Rick Burger (right) presents a rebate check for $4,152 to Greencastle Mayor Bill Dory in response to the city's recent participation in an energy-efficiency effort at City Hall in which nearly 350 fluorescent and old-style lightbulbs were replaced with LED lights both inside and out.

For recently replaced were a total of 343 lightbulbs -- 302 four-foot fluorescent bulbs and 41 others -- both interior and exterior.

Thanks to an energy-efficiency program promoted by Duke Energy, there isn't just a financial savings projected for the city, but a visual benefit as well. The actual quality of the light at City Hall is now "closer to daylight without the fluorescent flicker or hum," Mayor Bill Dory told the Banner Graphic.

Mayor Dory noted that the city will see a payback on its $11,456.90 investment "in a little over two years."

The estimated savings on City Hall lighting is about 65 percent or an estimated $3,100 per year, the mayor added.

After the rebate, a payback period of about 27 to 28 months is expected, depending on use, Dory said.

Work was done by Energy Harness, a company that has worked in a similar capacity with Putnam County Hospital and local school systems. The actual work at City Hall took less than three days.

The new bulbs are guaranteed for five years, Dory said, and are expected to last 10 or more years.

Meanwhile, many of the fixtures at City Hall were rewired to remove the ballasts for the outdated fluorescent bulbs. The actual fixtures, however, were not replaced.

As an added benefit, the reduced power consumption provides an estimated reduction of CO2 emissions of 66,000 pounds per year, Mayor Dory noted.