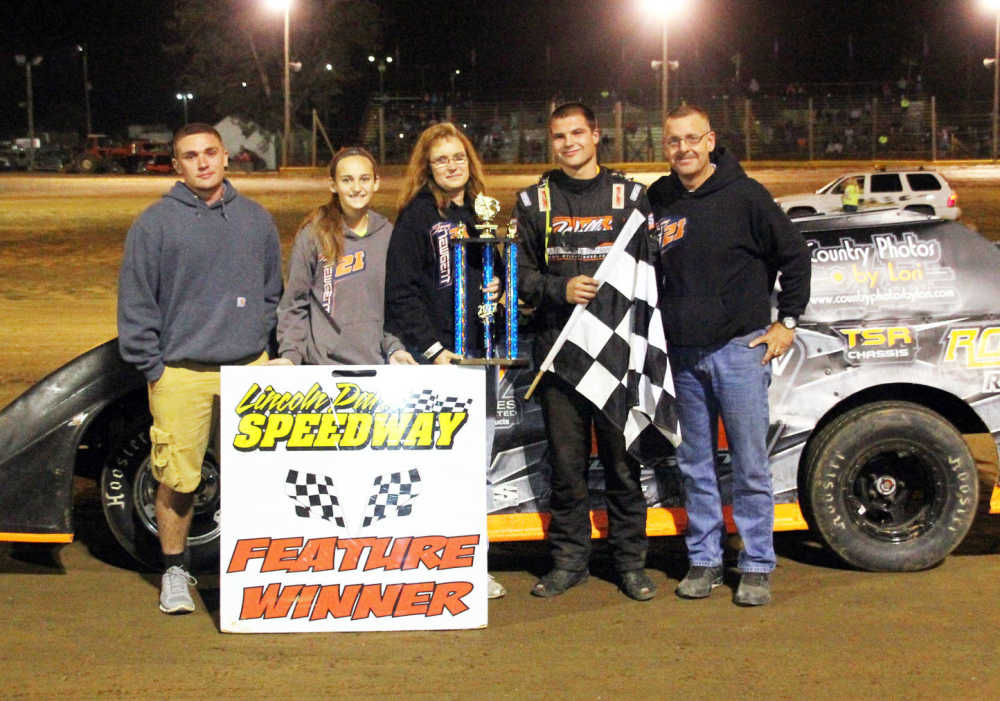 PUTNAMVILLE – Kyle Cummins added his name to the list of drivers that have earned the “King of Non-Wing” sprint car title at Lincoln Park Speedway.

The Princeton native topped 43 other drivers that were on hand to edge out Brent Beauchamp and AJ Hopkins for the 30-lap victory.

The victory came not long after he got past Jake Leitzman in the final laps to record his third UMP Modified win of the season.

CJ Leary and Jerry Coons Jr. started on the front row of the sprint car main event with 30 laps separating drivers from a large payday.

Coons would lead early on with Leary and Cummins in tow, but Leary and Jeff Bland Jr. would tangle in turn two to bring out a caution. The mishap sent Leary to restart at the tail as Bland’s night came to an end on lap 10.

On the restart, Beauchamp had made his way into competition alongside Cummins as Casey Shuman entered the fray after starting 12th. By lap 14, Beauchamp had tracked down Coons and made the pass for the lead. However, nothing was certain at this point.

Coons immediately pulled back to Beauchamp’s nerf bar with Cummins closely in tow ahead of Shane Cottle and Shuman. Hopkins and Dave Darland were close behind, fighting for sixth position.

At the halfway mark, Cummins roared into the lead after a brief three-way scrum for the point. Cummins snagged the top spot on lap 20 as Coons began to fade.

A final caution with eight laps to go set up a final dash to the finish, but Cummins was up to the task. He got a strong jump as the green flag waved and Beauchamp’s last ditch attempt coming into turn four had him jump the cushion. Cummins grew his lead as Beauchamp recovered quickly, but the gap was too great. Hopkins cruised home third ahead of Shuman and Cottle.

In the secondary sprint feature, Joe Ligouri got past Jamie Williams on lap 16 and then pulled away to top Matt McDonald at the finish line. Rob Caho Jr., Williams and Adam Wilfong made up the top-five.

In the UMP Modified main event, Paragon’s Jake Leitzman had designs on scoring his first UMP Modified win at LPS, but Carmichael Jr. had other ideas.

Leitzman took the lead on lap nine after a battle with Carmichael and built a solid lead by lap 15. However, a caution reset the field and Carmichael took advantage, pulling alongside Leitzman and making the pass out of turn two. Jeff Deckard got past Josh McDaniel to place third with Richie Lex claiming the fifth spot.

In the UMP Super Stock feature, Newgent and Doug McCullough were door-to-door through the opening 10 laps as Wes McClara and Chris Hillman in tow. Newgent found an opening on the bottom heading into turn three as McCullough slipped midway up the track. Newgent shot through the hole and didn’t look back over the final seven circuits.

Newgent pulled away to the win. McCullough, Hillman, McClara and Paul Wright made up the top five.

In the 28-car main event for bombers, Carmichael got to the lead after starting second and was able to navigate lapped traffic and several late cautions to pick up the bomber win in the Carlos Bumgardner-owned No. 8 car.