PUTNAMVILLE -- A 31-year-old Putnamville Correctional Facility (PCF) maintenance worker was arrested over the weekend on felony charges of theft and official misconduct. 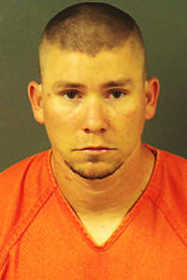 Dallas Strother of Greencastle was booked into the Putnam County Jail at 4:18 p.m. Friday after anonymous sources led the Office of Investigation and Intelligence (OII) to start looking into the plumbing foreman's actions.

Nail guns, plumbing items, rolls of wire and other tools were reported missing over several months at the facility and suspicious activities, including making items out of state materials and selling them to other employees, led OII to conduct surveillance on Strother. Subsequently several acts of theft were witnessed, authorities said.

No dollar amount was immediately available on the stolen items and materials.

After securing a warrant for Strother's house and truck, Putnam County Sheriff's officials were notified and agreed to assist the facility in the investigation.

After cooperation and having his house and truck searched, Strother admitted to stealing many items over a long period of time, hiding them in a crawl space at his house in Greencastle, as well as having had offenders from the Putnamville Correctional Facility construct items for him.

The Level 6 felonies each carry a sentencing range of six months to 2-1/2 years in jail.