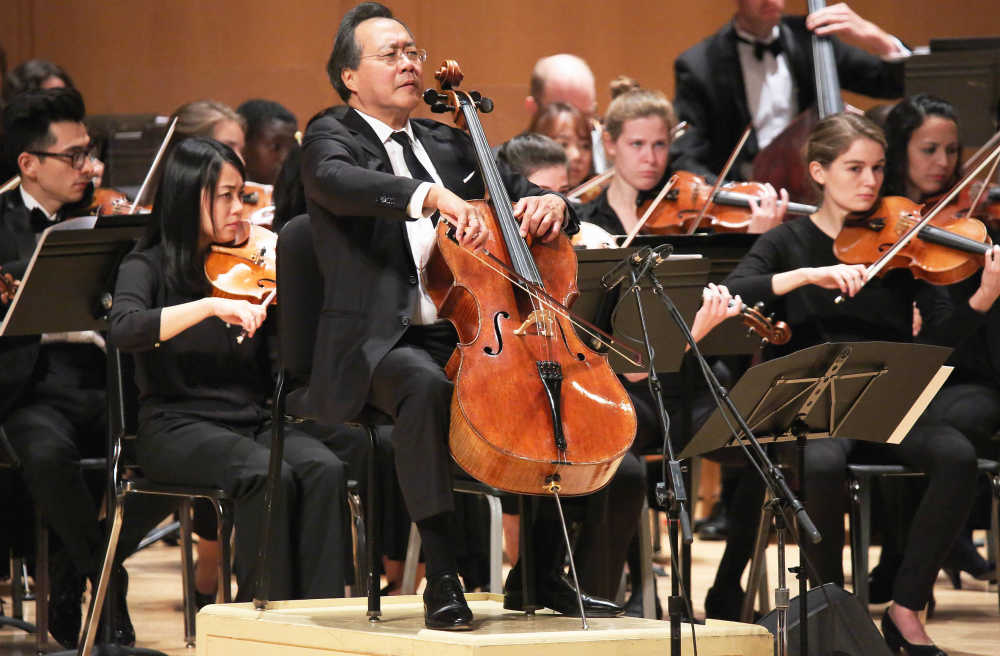 As the world's greatest cellist, the incredible thing about Yo-Yo Ma is that he doesn't even need his beloved instrument to move and inspire people.

That much was readily apparent Saturday before, during and after his performance with the Civic Orchestra of Chicago at DePauw University's Green Center for the Performing Arts. It was obvious all week during his various visits in and around Greencastle and DePauw.

And it's been evident ever since he first set foot on campus with the Civic Orchestra in 2011.

The personable and expressive Ma -- who wowed a capacity crowd Saturday night performing with the orchestra and a wild group of percussion instruments interjected into the music "Azul" by Michael Ward-Bergeman, Jamey Haddad and Cyro Baptista -- says "DePauw is a secret place."

"Who knows about this?" he asks. "Are there more people doing good things?"

Big things, innovative things, joyful things are happening at DePauw and in Greencastle, he says, because of the activities like 21st Century Music Initiative he chairs and the music and musicians and energy it brings to campus and community.

"New things don't always happen in big places," assured the 62-year-old Ma who was born in Paris, and as a solo cellist has performed with orchestras around the world in winning 18 Grammys.

His association with the university and the community, he noted, "started with the Greens."

That's Judson and Joyce, DePauw Classes of '74 and '74, respectively, the same folks the Green Center is named for and the same people renovating the building on the east side of the square that houses Bridges Pizza and Wine Bar and the rooftop venue soon to open.

Ma met the Greens in Chicago while he was consulting with the Chicago Symphony and they spent a great amount of time taking about education and music and jobs in the 21st century, and what kind of jobs would be good "for a world that's changing so fast."

Central to that, confided Ma, a graduate of the Juilliard School of Music and Harvard University, "is a set of values that keeps us human."

"How do you cope with change," he asked, "while you remain true to those core values?" 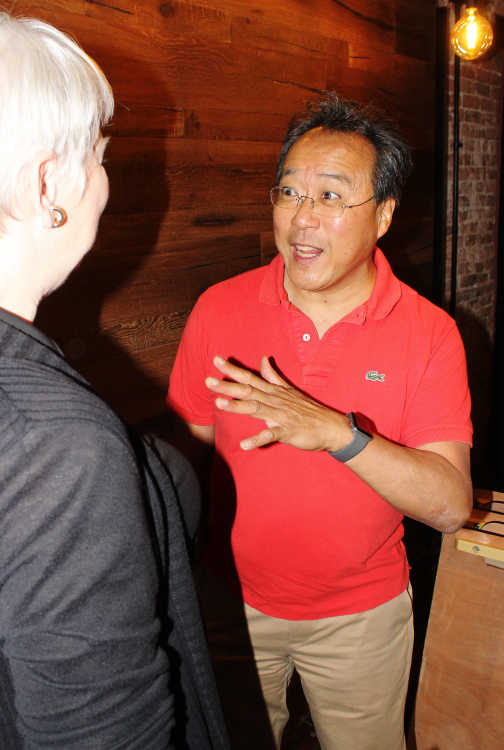 The world’s greatest cellist, Yo-Yo Ma, chats Saturday afternoon with Suzanne Hassler, manager of music marketing and publications at DePauw University, during a gathering at Bridges on the east side of the square in downtown Greencastle.
Banner Graphic/ERIC BERNSEE

While the Greens urged Ma to visit DePauw, he also received the same invitation after meeting Mary Meeker in San Franciso and running into alum Vernon Jordan.

"All of these people coming out of the woodwork were DePauw grads," he said, noting that they all shared "a series of deepening conversations" before Ma made that first visit in fall 2011.

"The first time we came," he offered, alluding to the Civic Orchestra, "we had hamburgers (GCBs, no doubt) and pizzas from Marvin's. We were so excited. They were open late and it was a 25-minute wait, but we were told, 'You've got to do it.'"

That experience helped lead to a return trip in which Ma cut the ribbon on the Music on the Square (M2) building in June 2015.

"The point is," he shared, "we saw the opening of M2 and the development and evolution of not only town citizens' engagement in the downtown but the university and participation in the music school."

And that, in turn, has helped drive innovation and entrepreneurial spirit and creativity.

Yet defining creativity is a tough one, the ever-creative Ma assures.

"How can we work on creating shared narratives in a fractured world?" he asked. "It's hard to be creative.

"What's creativity? There's the theory and the practice. DePauw is taken really seriously as one of the leaders in the country on an issue that's tough to discuss and bring to the table in a serious way," the world's best-known classical musician notes. "What I love about what this does is when you do something really, really well, it transcends the form itself.

"The purpose," he added, then becomes "to speak most directly to the heart from the language of the piece."

Ma, considered a prodigy and already a classical musician by age seven, said that with music and arts and science, "it's about seeding knowledge."

"I call myself a worker in culture," he said. "The area I live in, I think a lot about.

"One commitment I've made, is if you work in culture, your work never ends. You're looking at life, what gives people meaning. You don't stop that."

And that instrument he plays? It's one of two -- a 1733 Montagnana cello from Venice or a 1712 Davidoff Stradivarius.