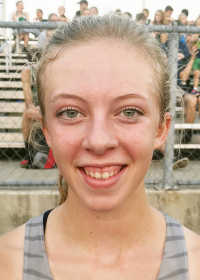 Greencastle junior Emma Wilson will be seeking her third straight state finals appearance on Saturday when she and five other Putnam County runners compete in the Shelbyville Semistate at Blue River Park.

Wilson will be joined by Cloverdale’s Lily Monnett and South Putnam’s Chelsie Edwards and Lillie Stein in the girls’ race on Saturday, while Ben Gellman of Greencastle and Austin Rumley of South Putnam will be competing in the boys’ race.

All six Putnam County runners advanced to the semistate from the Ben Davis Regional, and will be joined by athletes from the Noblesville, Rushville and Shelbyville Regionals.

Wilson won the Ben Davis Regional in a time of 17:36.72, more than one minute faster than runnerup Abigail Lynch of Brownsburg.

Stein placed 34th overall and was the eighth-fastest from a non-advancing team.

Wilson was seventh in last year’s Shelbyville Semistate with a time of 17:59.3, and went on to finish eighth in the state finals for the second year in a row.

Her winning regional time is the fastest of the four sites feeding into the Shelbyville Semistate.

The next closest competitor time-wise was Carmel’s Phoebe Bates, who was approximately 25 seconds slower on the Noblesville Regional course at White River Elementary School.

Rumley was 15th overall at the Ben Davis Regional with a time of 17:04.23, and was the second-fastest runner from a non-advancing team.

Gellman was 24th overall and was the sixth-fastest runner from a non-advancing team.

Putnam County’s runners are all running as individuals, and are seeking to place in the top 10 among those from non-advancing teams.

State finals qualifiers will run on Oct. 28 at the LaVern Gibson Championship Course in Terre Haute.