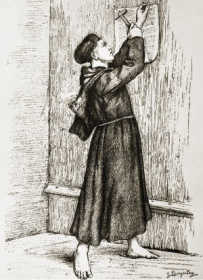 When he did so, Martin Luther simply wanted to share and discuss pastoral concerns he had over a questionable practice of the medieval Roman Catholic Church: The sale of “indulgences,” or special permissions for entry into heaven received by paying a fee.

However humble Luther’s intentions were, his 95 Theses sparked a reaction that has had lasting effect throughout Western civilization, both sacred and secular. Known as the Reformation, these 500-year-old events directly either brought about or brought to the fore issues that are now embedded in our culture, including:

• A distinction between church and state,

• The right of common citizens to protest and the duty of government to properly deal with that protest,

• Singing in church for the congregation and

• Worshipping and reading the Bible in one’s own language.

All of these effects and more stemmed from Luther’s conviction that Christianity’s true message, drawn from the Bible alone, is that God has saved us from our sin by grace alone (a gift), through faith alone (also a gift), on account of Jesus Christ alone.

He believed that the Church needed to return and be re-formed to the original teachings of Scripture that had been corrupted by the Church’s medieval leaders.

Oct. 31, 1517 was only the beginning of a Reformation that would last for years to come.

On Sunday, Oct. 29, Peace Lutheran Church will celebrate this historic anniversary with its annual Reformation Festival. The festivities begin with a look at and listen to the music of the Reformation at 9 a.m., followed by worship using that music at 10:15 a.m.

A special meal will be served at 11:45 a.m. and a Reformation-themed Trunk-or-Treat will take place from 2-4 p.m.

Please call the church office at 653-6995 or email peacegreencastlein@gmail.com for more information.