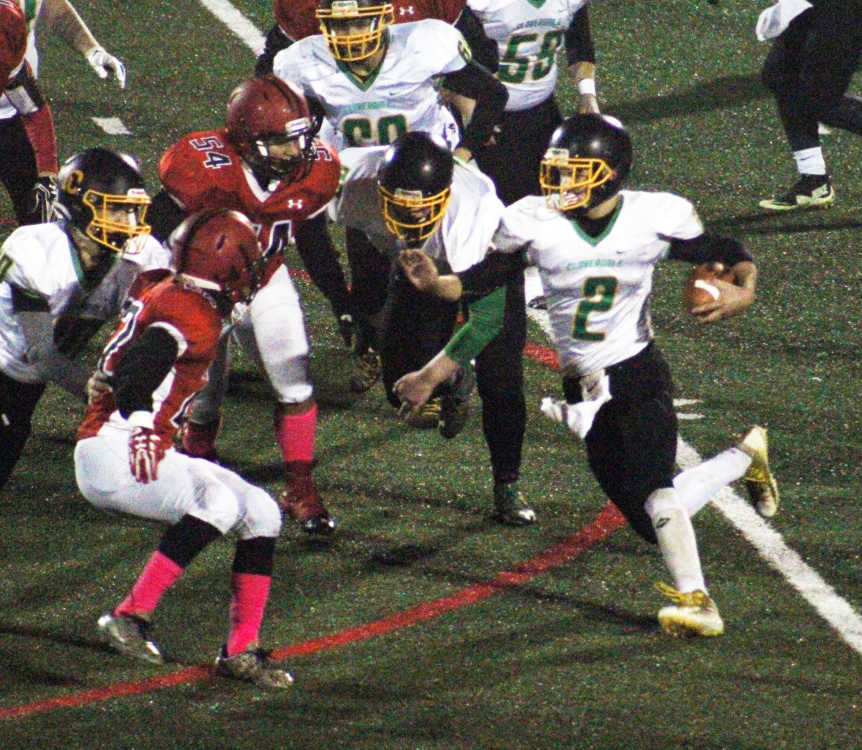 Cloverdale’s Nick Winders (2) tries to get around the corner against Park Tudor on Friday night.
Banner Graphic/JOEY BENNETT

The Clovers’ late-season run came to an end, as the speedy Panthers used the strong running of Bishr Jones to record a 28-6 and move to their first sectional championship game since 2006.

For Cloverdale, the season ended with a 5-6 record.

First-year coach Tom Winders was a newcomer to experiencing the emotions of a season-ending defeat, but looks back on the season favorably.

“We had a great season,” Winders said. “We had a history-making season, to get right down to it.

“I’m very proud of this team,” Winders added. ”We had small numbers and we were undersized, but in the state rankings you can’t rank heart — and that’s what this football team had.”

Jones was an explosively fast runner who had a 75-yard TD run among his 218 rushing yards.

“They were fast,” he said. “They were even faster than we thought. We watched the game film, but they corrected their offense and they did a fantastic job.

“We tried to throw a little bit of everything at them, but we couldn’t get anything going,” Winders added, “whether we were running the football or passing the football.”

Winders thoroughly enjoyed his first year at the helm of the Clovers, although he admits it was sad to see his son (Nick) and so many classmates he has gotten to know well over the years bring their careers to an end.

“I absolutely loved it,” he said. “I’m looking forward to next year. I’m a little bit emotional right now — they’re my boys.

“It’s tough, especially since you’ve worked with this group of seniors since they were in the second grade.”

Jones took off on a 40-yard run on the game’s first drive, and the Panthers dented the end zone just 1:15 into the game on a 29-yard pass from Anthony Safford Jr. to Kamron Ferguson for a 7-0 lead.

Neither team was able to score for the rest of the period, but the Clovers had a drive that started near midfield and carried over into the second quarter which ended in a missed field goal.

The Clovers were not without chances for the rest of the period, driving to the Panther 10 before being stopped on a fourth-and-2, then taking over at the Panther 25 on a short punt before Parker Watts was intercepted on the second play.

Park Tudor scored one of the more unusual touchdowns you’ll ever see just 56.8 seconds before halftime, one reminiscent of a “hail Mary” pass thrown by NFL greats Aaron Rodgers or Brett Favre.

Quarterback Anthony Safford Jr. fired a pass high in the air on fourth-and-13 at the Clover 28. Ferguson tipped the ball, and Caleb Thomas grabbed it out of the air and took it in the end zone for a 14-0 halftime lead.

The Clovers took over at the Panther 10 following a fumble midway through the third period, and senior Tyce Jackson got his team on the board with a 2-yard TD run with 7:19 left in the period.

Momentum seemed to be going Cloverdale’s way, before Jones provided the dagger and another reversal of momentum.

The Panthers took over at their own 25, and Jones burst around the left end on the first play from scrimmage and ran untouched for the 75-yard TD score that made it 21-6.

Park Tudor added an insurance touchdown with 6:09 left, as Jones scored on a nine-yard TD run.