CLOVERDALE -- A 56-year-old Cloverdale woman died Wednesday afternoon when her car left the highway and plunged into a pond along U.S. 231 in southern Putnam County.

Despite the efforts of officers who waded through icy waters, Lavada Anne Boyette was pronounced dead after being transported from the scene to Putnam County Hospital following the 12:48 p.m. accident. 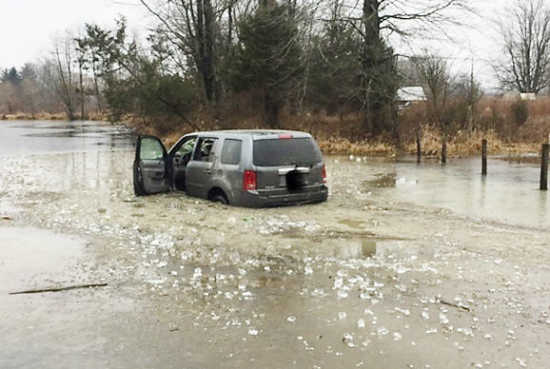 Southbound 2013 Honda Pilot, driven by Lavada Anne Boyette, traveled off the east edge of U.S. 231 and into a pond for an unknown reason.

Indiana State Police and several other emergency agencies responded to the area of U.S. 231 and County Road 1300 South, south of Cloverdale near the Putnam-Owen county line, on the report of a vehicle running off the roadway and into a pond.

Moments before the accident, the Putnam County Sheriff's Office had received a 911 call from a victim reporting that they had been run off the road by a vehicle in that area.

State Police Senior Trooper John Myers and Cloverdale Police Chief Steve Hibler and Officer Rick Lambert braved the ice, making their way across the approximately 30 feet of frozen area to the vehicle. The officers broke out the driver's-side rear window of the Boyette vehicle, unlocked the driver's door and pulled the unresponsive driver from her vehicle.

The officers and fire-rescue personnel initiated efforts to revive the victim before she was transported to PCH.

No other victims were found but the ICOs remained at the scene to assist with vehicle recovery efforts from the water.

Preliminary investigation revealed the southbound 2013 Honda Pilot went off the east edge of U.S. 231 for an unknown reason. The Honda continued a southeasterly course for approximately 600 feet before coming to rest in the pond.

At this time, authorities do not know why the Honda Pilot left the roadway. Investigation is ongoing with an autopsy scheduled Thursday at Terre Haute Regional Hospital with Pathologist Dr. Roland Kohr.