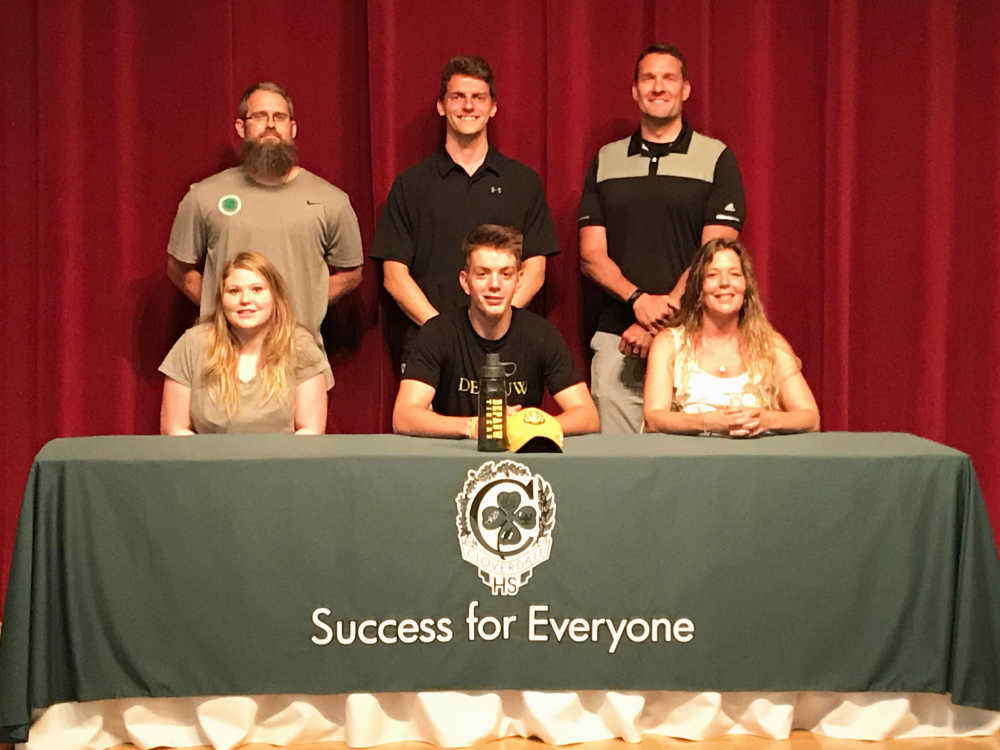 CLOVERDALE — Two-time state hurdles finalist Tyler Kaeff of Cloverdale will be taking his skills to DePauw University this fall.

Kaeff, who qualified for both the high and low hurdles as a sophomore and in the high hurdles as a senior, will also be playing football for the Tigers.

His greatest high school successes, though, came on the track.

As for all athletes moving up to college, there will be adjustments. In the low hurdles, for example, the race covers the entire 400-meter track and the hurdles are three inches higher.

Clover coach Andy Tyler thinks Kaeff can make those changes with no problem.

“He can make the transition,” Tyler said. “He’s a hard worker, and he’ll be OK.“

Tyler deferred to Clover assistant Cole Seward, who competed in the hurdles for Wabash College for four years, for a more specific outlook.

“Going in as a freshman, 15 seconds is a good time in the high hurdles,” Seward said. “Adding height to the hurdles will take a little adjustment, but not much. The way he is aggressive in attacking the hurdles makes him so successful.

“He probably won’t do very well his freshman year,” Seward added. “Nobody ever does. But after that, he’ll do well.”

Seward thinks Kaeff is so successful in the hurdles due to a mental factor, rather than a physical one.

“People don’t understand that you have to be a sprinter first to be a good hurdler,” he said. “Tyler, fortunately, is a little bit of both. The fact that he can not spend a lot of time in the air, and spend more time on the ground, makes him stand out from other hurdlers around the state.

“A lot of younger guys will try to jump the hurdles as high as they can, so it looks like 10 high jumps or 10 long jumps in a row,” Seward added. “With Tyler, he really understands that he’s a big, powerful guy and if he knocks a hurdle over he can go on and finish the race.”

Tyler added that Kaeff has gone through four years of “hurdle drills,” which he admits are not fun.

“He has paid attention to detail, and made the small adjustments you have to make to be competitive at this level,” Tyler said.

Kaeff admits that his signing day, which came toward the end of the school year, is something he has looked forward to for a long time.

“High school is over, and that’s exciting,” he said. “College is going to be even more fun, and I’m looking to playing two sports there.”

Kaeff said whether an athlete competes in both the high and low hurdles in college is up to the coach, and sometimes athletes do both while in other cases they focus on one of the two.

“He wants me to do both to start off,” Kaeff said. “We’ll see if I’m good at both of them or just one of them.

“I think I’m better at the high hurdles,” Kaeff added. “If I do the proper training for the low hurdles, I should be able to do it.”

Football-wise Kaeff thinks he could play receiver or defensive back.